More on Iran and Europe 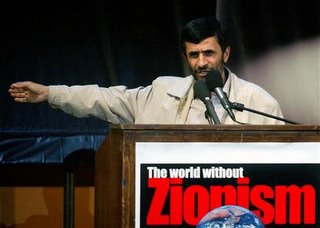 The ever useful USS Neverdock calls attention to an attempt in some western media to play down President Ahmadinejad’s speech in which he called for Israel to be wiped off the map. The example he gives is, inevitably, the Guardian, the highly civilized newspaper that has been known to publish cartoons of Ariel Sharon, which would not have disgraced Der Stürmer and has also been known to hire members of terrorist groups as trainee journalists.

This wonderful and unbiased newspaper, along with numerous other outlets of the MSM somehow forgot to mention that the President attended the, no doubt “spontaneous” anti-Israeli demonstration the day after the opening of the “World Without Zionism” conference. Not only attended but repeated his calls for Israel’s destruction.

Much has been made of the fact that several Iranian ambassadors have played down the speech and its aftermath, chuckling knowingly to the avid journalists that, well, you know, boys will be boys and politicians will be politicians and, well, there you are. Have to let him have his little fun but you and I know he means nothing by it.

Well, what a shame. It seems that three ambassadors, to France, Germany and the UK, have been fired and eighteen others recalled. These are all ambassadors appointed by former President Mohammed Khatami. From the little we have seen of the present regime, one does not expect the recalled and fired diplomats’ fate to be pleasant. I wonder, how many of them will ask for asylum instead of returning. 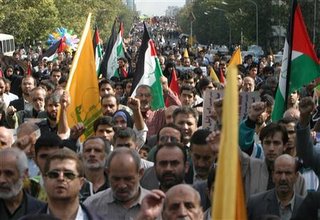 In the meantime the words coming out of Teheran cannot be said to downplay the presidential pronouncements. According to IranFocus:

“Ahmadinejad has been angered by what he sees as the envoys’ meek reaction to the global condemnation of his Wednesday speech against Israel and the West”, the official, who requested anonymity, said. “He made the speech with the full blessing of the Supreme Leader [Ayatollah Ali Khamenei] and has his green light to stifle any dissenting voice within the government”.

Among the top political and military figures who rushed to support the President (well, what else can they do?) was the Minister of Intelligence and Security (that’s secret police to you and me). One official, who, for obvious reasons, prefers to remain anonymous said:

“The Supreme Leader and his inner council see a window of opportunity for Iran right now, as the Americans are stuck in Iraq and the Europeans are divided over what to do. They are telling everyone not to be afraid of threats of military action by the West, as this is only a bluff”.

In other words, the European have played their useful part again. As we have said in numerous postings before, the “soft power” of Europe, seen in the endless negotiations conducted by Britain, France and Germany with Iran has led nowhere.

No, that is not quite true: it has led somewhere for the Iranians, who have openly and gleefully announced that the negotiations and the Europeans’s refusal to take the matter to the Security Council, have allowed them to proceed with nuclear developments and to amass money that would be useful, should they wish to go to war some time. 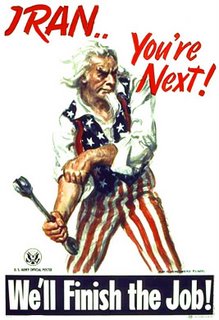 Iran may well be preparing for war against Israel and, then, other enemies. Whether this is practical or not from their point of view, is another matter. The mullahs make no secret of the money and arms that go to Hizbollah and, sometimes, Hamas, and the nuclear development is well in hand.

The idea that Israel will simply sit back and wait to be annihilated is a joke. The notion that the Americans will do nothing to contain this threat is also a joke. After all, they can turn to the Europeans and say: “We let you try to solve the problem and a rare old hash you made of it.”

Either way, the situation is becoming tenser (while, incidentally, Gaza continues to slide into a full-scale civil war and the terrorist attacks on Israel have not ceased). But I have no doubt that the bien pensants will continue to witter about Bush being the most dangerous man on earth.