Time to call it a day?

We first picked up the story on Saturday 1 October and then again on the following Tuesday. The BBC got a sniff of the story the following day, but got it wrong. Now, today, The Sunday Telegraph picks it up big time, reporting "Chairman resigns (twice) in furious UKIP row" – the resignation of Petrina Holdsworth.

"Everyone's talking about party leadership: Tony, Gordon, David, Ken, David (the other one) and even a Malcolm," writes Daniel Foggo, adding, "The internecine warfare at the top of the main political parties, however, cannot rival the self-destructive tendencies of the UK Independence Party."

And there you have it. Just when the Party might be expecting a glowing report of its conference over the last two days and it gets this story. Had it dealt with it last week, when it emerged, and had even the party leader, Roger Knapman, sorted out the underlying problem, the publicity could have been different. 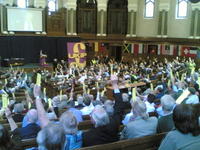 But, having kept the lid on it for the conference and it membership thus largely uniformed, it got away with a subdued conference, avoiding what some were predicting might be a stormy occasion, with Knapman being called to resign. But now comes the political price.

"Last week, as its leadership acknowledged that the party's fortunes had ebbed severely since the European elections, this minor parliamentary grouping saw the biggest of political spats among some of its senior figures," continues Foggo. "On the eve of its party conference, which ended yesterday, a furious, expletive-filled exchange of e-mails took place that precipitated the resignation - twice over - of the party's chairman, Petrina Holdsworth, despite an apology being issued to her by Roger Knapman, the party's leader."

The Sunday Telegraph then revels in printing the text of some of the e-mails that led to the resignations, which can be seen via the link to the story.

And does it really matter? Well, as we pointed out in our earlier posts, the degeneration of the main anti-EU party will be seized upon by the Tory leadership candidates as evidence that UKIP is no longer an electoral threat. Thus, concessions which might have been wrung out of them will be harder to broker.

In the longer term, the failure of UKIP to get its act together diminishes the whole of the Eurosceptic movement. Set up in the wake of the Maastricht Treaty, in 1992, an ominous 13 years later, the Party may now have proved to have been a cul-de-sac, doing more harm, overall, than any little good that it ever did. Perhaps it is time for it to call it a day.