The twin has it 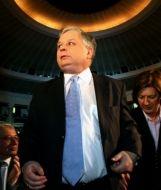 The other Kaczynski twin, Lech, has won the Polish presidential elections. With a turn-out of 50.6 per cent (something to do, perhaps, with the plethora of elections the Poles have had to go through recently), his share of the vote is predicted to be around 52 or 53 per cent.

His rival, Donald Tusk, has conceded.

The run-off between the two has brought into prominence the peculiarity of East European politics. Both candidates were on the right, both mildly critical of the European Union and both, basically, Atlanticist in their foreign policy ideas.

However, the division in most East European countries and, especially, on the right of the political spectrum is often between those who are more inward looking, almost obsessive about their country’s history and, inevitably, its woes, and those who look outwards, wanting their country, in this case Poland, to be part of the western world.

Kaczynski represents the first of these and Tusk the second. In parliament the two parties, Law and Justice and Civic Platform will have to form a coalition but the President wields a good deal of power. As the International Herald Tribune put it:

“He is commander-in-chief of the armed forces, has a major voice in influencing economic and foreign policy and can veto legislation.”

Kaczynski has promised to defend Poland’s interests vigorously against Germany, Russia and the EU. How he intends to do the last of these, while demanding more money, remains to be seen.

Poland has been having various problems with Russia as we described on this blog in several postings. President Kwasniewski played a crucial role in Ukraine last year and the previous government took a strong line over the oppressions in Belarus. There have also been diplomatic falling-out with Russia but the issue seems to have been resolved. On the other hand, Poland relies very heavily on Russian gas and that may, should President Putin decide to take the gloves off, put something of a dampener on Kaczynski’s policies.

The EU has already made it clear that it is not going to intervene in matters it considers to be bilateral, that is relationship with its immediate neighbours.

As far as Germany is concerned, Kaczynski has spoken of reopening the question of WWII compensations. This is a tricky policy. So many years after the war, a new generation of Germans may not be all that amenable to blackmail. Furthermore, there have been recent publications on Polish behaviour towards the Jews during the Nazi occupation, which did not please the Polish authorities. It might be best not to stir up too many hornets’ nests.

Kaczynski’s proposed domestic policies are different from Tusk’s, the latter being an economic liberal, advocating “an economy with minimum bureaucracy and a transparent, flat rate of income tax”.

The President-elect, on the other hand, having promised to deal with the corruption of the former Communists, many of whom have been in position of power, is also in favour of “cutting taxes and sharply reducing state costs while increasing family benefits and retirement contributions”. It remains to be seen whether the maths will add up but it was a powerful slogan in a country with high and growing unemployment.

There is also the question of what Kaczynski has termed “moral revival”, a popular concept with some parts of the Catholic Church, though not the hierarchy, and the rural population. Again, we have to wait and see what he will actually mean by that but the notion of reversing certain cultural developments in a country, whose youth has travelled widely in the West, seems fraught with difficulties.