It's up to the national economies… 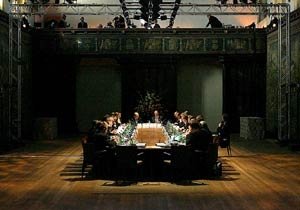 It is too much to expect the phalanx of witless hacks to describe the event at Hampton Court yesterday as an "informal European Council", which is precisely what it was – a meeting of our government over the water. But such polysyllabic sophistication seems to be beyond the average hack so, from the BBC to Reuters, they all contented themselves with the term "informal summit".

The Times, for the sake of convenience, leads the way, with its report telling us that the chances of a settlement on the EU budget during the British presidency are slipping away, with Blair conceding the obvious by stating that achieving a deal by December would be a "tall order". 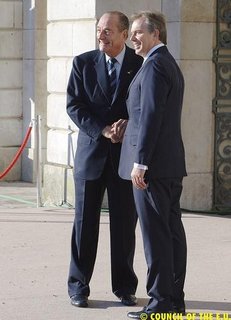 This he knew from L'Escroc's helpful intervention earlier in the day, when he warned that he would be prepared to veto a deal at the WTO talks in Hong Kong if this involved any cuts in farm subsidies. On the other hand, Blair is maintaining his position any agreement on the rebate would be conditional on "big concessions" from France and others on the CAP. Did I hear "groundhog day"?

Thus, with the president whose name we dare not utter, and the prime minister whose name we prefer not to, at odds, the talk centred around fluffy bunny ideas from Barroso. These included programmes of action on research and development, raising standards in universities, developing a common European energy policy and combating illegal migration while promoting skilled immigration and promoting the work-life balance.

Gerhard Schröder, at his last meeting as German Chancellor, then put the boot in by pouring scorn on "free-market reforms" and voiced scepticism about a plan for a "globalisation fund" to help workers to adjust to competition from India and China. 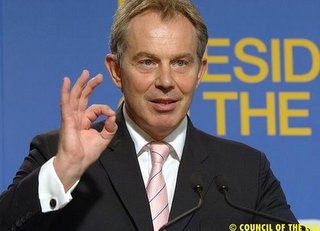 This did not stop Blair warbling about "a strong sense among leaders" that "Europe needed to be put back on track". He then added that there had been "broad agreement" about the right direction for Europe's economic and social policy, which means, of course, that the discussions had been so vague that no one had found any cause to disagree.

Barroso, in that ghastly sing-song voice of his, nevertheless burbled that it had been "a great day with great atmosphere". "The spirit was really good. I believe this gives us the right political context for an agreement on the budget in December. I believe Europe is on the move again." 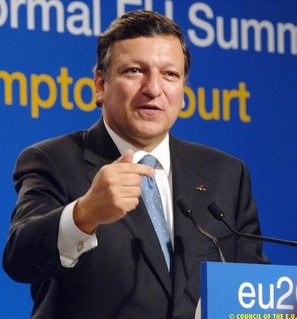 Reuters also picked up the "cordiality" theme, telling us that European Union leaders "mended fences", agreeing the challenges posed by globalisation required "new thinking". But, it said, most participants complained that specific policy measures were thin. Instead, it seems that discussions centred on a "strategic vision" for the EU.

But, says the Financial Times, behind the bonhomie, intractable problems remain, with Europe divided on issues such as liberalisation of the EU's services market, farm reform, world trade negotiations and the British rebate.

And, of the French-backed policy idea – a globalisation "shock absorber" fund to help workers retrain in the event of corporate restructuring – Göran Persson, Swedish prime minister, said: "It's old-fashioned, it doesn't belong to a modern strategy. If such adjustments took place, it's up to national economies to deal with that."

And so, as the EU leaders trogged off back to their respective homes, they could glory in the fact that, once again, they – our real government – had yet again failed to agree anything of real substance and were unlikely to do so in the near future. Perhaps Persson has it: "it's up to national economies to deal with that." That does not say a great deal for the survival of the project.