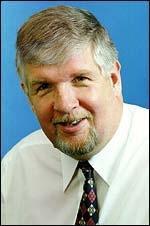 "To lose one may be regarded as a misfortune," said Lady Bracknell. "To lose two would look like carelessness."

That much could already be said of the UK Independence Party which, from the heady days of the Euro-elections last year, swept up twelve seats, only to lose Ashley Mote when it was learned that he had failed to declare an impending court case for benefit fraud, and then the egregious Kilroy-Silk following a very public fall-out.

But now, if the story in today's Sunday Telegraph is any guide, the Party is well on its way to losing a third.

This particular MEP is one of the least-known of the ten remaining, a certain Tom Wise (above). He appears to have been contradicting his own surname, having claimed £36,000 from the EU parliament to pay his researcher, Lindsay Jenkins, and then pocketing all but the £6,000 that he actually paid her. When confronted by the Telegraph, he admitted that the extra money was in his bank account, claiming that he had not intended to spend it and was keeping it for his researcher.

However, Jenkins, herself had been unaware that, in claiming her £6000, paid as a monthly retainer of £500, Wise had told the EU parliament that it was six times higher than it actually was. When asked why there was a discrepancy between the amount he was claiming and the sum he had agreed to pay Jenkins, Wise told the Telegraph, "I don't fancy answering."

Wise is a former assistant to Geoffrey Titford and number two in the Eastern Region behind him. Titford recently took over the chairmanship of the Party after the resignation of Petrina Holdsworth. It now looks as if Holdsworth's resignation was not entirely unrelated to today's disclosure as it also appears that Wise's "indiscretion" was known to senior members of the Party who appeared unwilling to act.

Sources indicate that Holdsworth's demand for "greater transparency" in the Party related directly to this issue, as rumours had spread of a gap between MEP's incomes and their actual declared spending. The former chairman's resignation has now been followed by a senior member of the Party’s NEC and more are expected to follow.

Meanwhile, Wise remains a UKIP MEP, but surely not for much longer, the third to be expelled. And, if losing two, "would look like carelessness," we need another Lady Bracknell to suggest a word for the triple loss.