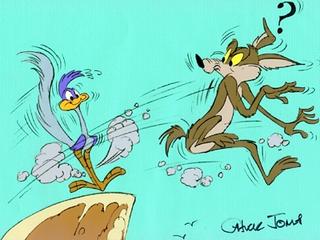 Writing last night of our growing conviction that the EU is dying, we did not expect an almost immediate confirmation for Europhile extraordinaire Will Hutton in today's edition of the Observer.

But there, large as life is an article by the same, headed: "Europe is hanging by a thread", in which Hutton equates the European Union to a "Tom and Jerry" cartoon. Tom, he writes, has run over the cliff edge chasing Jerry and his legs are still pumping furiously in thin air; he's yet to plummet to earth to meet some grizzly end. The EU has gone over the cliff edge, its legs are still pumping, but there's no realisation among its leaders or the wider public that a vertiginous plummet is imminent.

It says something for Hutton's unworldliness that he chooses "Tom and Jerry" for his analogy, as this cartoon is set in a domestic environment. Cliffs rarely feature. More famously, the cliff scenes are portrayed in the Loony Tunes "Road Runner" series, where it is more likely to be Wile E. Coyote who takes the fall.

Anyhow, this does not stop Hutton opining about next Thursday's informal European Council in Hampton Court Palace, although once again he gets it wrong, calling it the "routine half yearly European Council". It is anything but routine - this is a special event, outside the normal cycle, called personally by Blair.

Nevertheless, Hutton is right in saying that this meeting is different. "The EU is in an existential crisis over what it is for, where it is headed, how it is to be governed and how to win popular Europe-wide consent," he writes, adding, "Despite the appearance of normality, the crisis is beginning to paralyse the entire operation."

This is strangely reassuring for an entirely unconnected reason. Keeping this blog running with a daily diet of news and views has proved increasingly difficult and, for a while, I thought I was losing my touch. But, as Hutton illustrates, it is EU itself, rather than the news gathering, that is at fault. He writes:

The lack of agreement over everything - from the next seven-year European Union budget, beginning in July, to the stance that should be taken in the world trade talks set to begin in Hong Kong before Christmas - has gone well beyond the usual intra-EU spats.

The No votes in France and Holland on the EU constitutional treaty have left the 25-member EU without a workable system of governance. They have created, particularly in France, a political dynamic that opposes head-on the so-called Anglo Saxon liberal worldview that allegedly wants to dismantle Europe's social achievement and open up every European industry to the full blast of unfair global competition.

This, say the French and their camp-followers, is the not-so-hidden agenda of a lightweight EU Commission and its British ally; they are Trojan horses with the hidden mission of wrecking Europe. The mood is ugly, the divisions run deep.

Meanwhile, he continues, the EU economy continues to languish. By last weekend every member state was to have submitted its plan to contribute to making Europe the world's most competitive, knowledge-based, dynamic economy by 2010 - the so-called Lisbon agenda. This was to have been proclaimed in a blaze of publicity and political commitment that would signal a common European determination to do better. The plans were submitted. But not only did nobody notice, nobody cared. 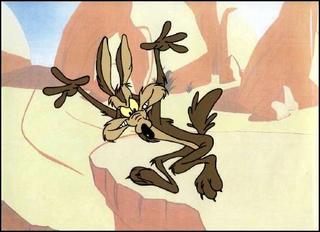 Then, to the sound of wailing violins, he tells us that the EU "is a fragile and beleaguered creation that could easily fall to earth like Tom" (or Wile E. Coyote), and is only as strong as the collective political commitment of its member states and citizens which is now sharply weakening.

The rest of his analysis need not detain us, but he concludes that, if you are on the side of the EU, you have fight for it. Beset by critics and internal division, without a sense of purpose and momentum, the EU will rot and implode. "Nobody should underestimate the risk…", he adds.

Interestingly, some of that "rot" is conveyed by an article in today’s Sunday Times, which tells us that the "colleagues" are growing increasingly critical of Britain’s presidency of the EU. Blair is under attack for doing too little to lift Europe out of its political crisis since the rejection by France and Holland of the proposed European constitution and critics are saying that Blair has failed to meet the high expectations that he set with his talk of modernisation in a speech to the EU parliament in June. An Austrian MEP, Otmar Karas, even says, "Blair seems to have gone into European hiding. He seemingly has left the stage".

It seems to me that Blair is simply recognising the reality. He does not want serious talks on a whole variety of issues because there is no prospect of agreement or advance. I wonder, though, if he realises that there is only one letter difference between "talks" and "tanks"?