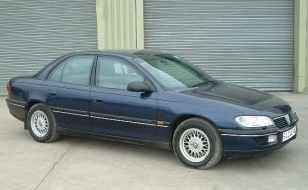 One of the most significant developments in ordinary political discourse over the last few years has been the emergence of the term "political elités", used to decribe the ever-widening gap between the nomanklature and us mere peasants. Certainly, in my dim and distant youth, I do not recall this term having any currency.

And, if there was needed any confirmation of the existence of that gap, several articles in today's papers would provide it. Not least, in The Business, there is the forensic dissection of the shameful cave-in by the government over public sector pensions last week, which cements in a two-tier system – one of tax-funded generosity for the apparatchiks and another of penury for us lesser mortals.

The story is also picked up in the Focus section in The Sunday Times, pointing out that public sector workers who retire in good health live two to four years longer than private sector retirees.

Another indicator of the gap can also be found in The Sunday Times, this one describing how the government intends to create VIP lanes reserved for athletes and officials at the 2012 London Olympics. Mere mortals who stray onto this sacred ground will face penalties of up to £5,000 under special powers sanctioned by the government, leaving as many as 55,000 members of the "Olympic family", including ministers, media and corporate sponsors, to sweep past the plebs.

We seem to have been here before, with Moscow's so-called "chaika-lanes" reserved for the politburo as they swept to and from their offices in their luxury Zil limousines.

But perhaps the most egregious contrast – also to be found in the Sunday Times – is, on the one hand, a story about how Cherie Blair is to be provided at taxpayers’ expense with a chauffeured armoured car. Use of the car, a bullet-proof Vauxhall Omega (pictured above), is estimated to be costing taxpayers more than £50,000 a year. She also has the use of a Ford Galaxy people carrier as backup.

The Times, incidentally, reminds us that Denis Thatcher, despite the real threat from the IRA, could often been seen strolling along Whitehall to meet his friends at a club or would take the bus using his senior citizen's pass – he, like all other prime ministerial spouses – was not entitled to an official car. 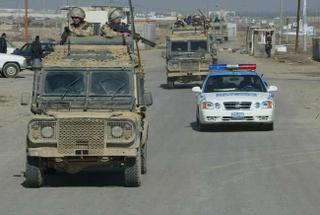 The contrast comes with the story in the same paper about how Lieutenant-Colonel Nick Henderson, commander of the 1st Battalion, Coldstream Guards has resigned after failing to obtain armoured Land Rovers for his patrols. He is understood to have been furious last week after one of his senior sergeants died as a direct result of the failure to supply "armour protected" Land Rovers for his men, forcing them to patrol in unarmoured vehicles. Sergeant Christian Hickey was killed when his vehicle was blown up by a roadside bomb on patrol in Basra late on Tuesday night.

The Ministry of Defence, predictably, is dead-batting this event, stating that "frontline troops cannot have the armoured Land Rovers because they are not unsuitable (sic) for use off-road," despite six weeks previously, Britain supplying a number of the vehicles to Iraqi police in Basra. 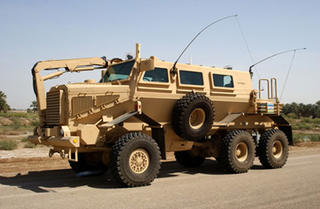 However, as we understand it, Sergeant Hickey was on foot patrol when he was caught by a roadside bomb that he was investigating. Yet the "dumb Yanks" - as too many people delight in calling them - are providing a neat little (actually not so little) machine for dealing with this type of problem, and it ain't an armoured Land Rover, which provides only very limited protection.

Weighing in at 23 tons, this machine is called a Buffalo (above). Designed on principles developed by the South Africans, it has a 30 ft extendible arm to check out suspicious road-side packages and debris, with highly effective armour to protect its occupants if a bomb does go off. Of course, if Tony Blair wasn't wasting our money on buying his wife armoured cars, and he hadn't wasted nearly £6 billion on his "European first" defence procurement policy, we might be able to afford a few of this highly desirable machines.