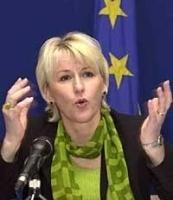 The Fragrant Margot is absolutely priceless (and, one might add, completely valueless). Two days before she launched her Big, Big New Idea, Plan D for Democracy, Dialogue and Debate, she produced a blog about her week-end. How cute.

So what did she do this week-end? Watched a lot of TV by the looks of it, although all very worthy stuff about medical research and events in Pakistan. Rather interesting this, as, presumably, she is trying to appear to be one of the masses (lots of TV) and highly intellectual (but only serious stuff) as well.

Before that her 12 year old son had a birthday, was given some fireworks (I trust they were severely checked against every single EU regulations and suggestion), annoyed the neighbouring dogs and was told to put the dratted things away by the neighbour.

If I were Margot, I would stop writing such rubbish. All she is doing is giving hostages to fortune.

In the first place, that is such a small amount of money for medical research that it is best not to talk about it. Secondly, as a respondent noted immediately, 25 or 30 or however many countries do not all work separately in little non-communicating boxes. Scientists and researchers within and outside the EU work together all the time and do not need air-head Commissars to tell them about it.

So what about Plan D? Well, she does mention it, right at the end of the blog and assures us that she will write about it when she has time. All that TV watching takes it out of one.

Meanwhile, we do have the plan in the form of a Communication from the Commission. It is, in fact, The Commission’s contribution to the period of reflection and beyond. I wonder whether there will be more of this semi-religious vocabulary in the future.

At least, the Commission press release tells us what the Fragrant Margot said about Plan D:

“Plan D is about debate, dialogue and listening. It is a means of harnessing political ideas to generate change. Faced with the challenges of globalisation, people are asking tough questions about job security and pensions, about migration and living standards. Europe must renew so it is part of the solution to those challenges.

Plan D aims to inject more democracy into the Union, to stimulate a wide public debate and build a new consensus on the future direction of the European Union. Now Member States must bring this process alive. My appeal today is for national governments to seize this opportunity, to kick start the debates and to act as a motor for European change.”

In other words, we want all the debate and dialogue in the world as long as the conclusion we come to is that more European integration is needed. And the Member States should stop worrying about their various economic, political and social problems but start spending money, time and energy to promote this rather curious dialogue.

EurActiv has shown itself to be sceptical of the national governments’ ability to deliver what the Commission wants:

“Just as with the Lisbon agenda to become the world's most competitive knowledge society by 2010, the Commission has set itself high ambitions with this Plan D. But as with Lisbon, it has very little leverage over the delivery capacity and will of the member states. Ultimately, the success of Plan D lies with the national political elites in the member states.

The lack of a real citizens' debate during the Convention on the future of Europe, where a similar listening and debating ambition was foreseen, does not bode well for Plan D. And there is the danger, that if this ambition fails, in the end, the Commission will get the blame, as it mostly does when national leaders fail to deliver.

The difficulty to convince member states to organise these debates on the future of Europe was underlined one day before Mrs Wallström's presentation when the Dutch parliament decided not to hold a broad debate on Europe after its 'No' vote on the Constitution.”

As it happens, the Lisbon Agenda was a complete failure because of a basic flaw that is intrinsically tied with the ideology of European integration: economic growth and development cannot be organized by the state according to a chart on which people can tick off boxes.

As for the Constitution and, indeed, the whole process of integration, carried on quietly but relentlessly even as I write this, the problem is also more profound than the question of Member States delivering what the Commission wants. It is the decreasing appeal of the whole project. As we have asked before, which bit of “no” don’t they understand?