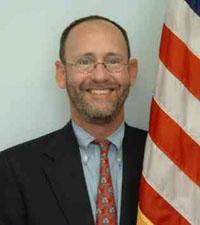 Oh just for once would we like to hear a Foreign Office official or a British politician utter these words: "We've been very, very clear throughout the process that there are certain things we can agree to and certain things we can't agree to… It's not a negotiating issue. This is a matter of national policy."

This is Ambassador David Gross (left) speaking, reported by AP and picked up by the Houston Chronicle by one of our alert readers.

Gross is the State Department's US coordinator for international communications and information policy, telling reporters at the UN offices in Geneva that, "We will not agree to the UN taking over the management of the Internet." He adds, “Some countries want that. We think that's unacceptable."

And that basically, is it. Despite the EU’s last-minute intervention on the side of the tranzies, possession is nine parts of the law and, if the US decides that it is not going to relinquish control, there is very little practically that anyone can do about it.

Needless to say, the BBC is waxing indignant over the whole issue. "The US has got an image problem when it comes to the internet", it squawks, displaying an execrable grasp of grammar.

"It is seen as arrogant and determined to remain the sheriff of the world wide web, regardless of whatever the rest of the world may think." And, heaven forefend, "it has even lost the support of the European Union. It stands alone as the divisive battle over who runs the internet heads for a showdown at a key UN summit in Tunisia next month," bleats the BBC.

Suppressing the giggles, one turns to the indignant Viviane Reding, the EU commissioner which the BBC describes as "the European Commissioner responsible for the net. There's posh for you.

She is "warning of a potential web meltdown". "The US is absolutely isolated and that is dangerous," she has told journalists in London. "Imagine the Brazilians or the Chinese doing their own internet. That would be the end of the story… I am very much afraid of a fragmented internet if there is no agreement."

The BBC's "take" continues with a wholly predictable trazie line: The UN "has been wrestling over who should run the internet for a number of years", it says and "America's determination to remain the ultimate purveyor of the internet has angered other countries which believe it is time to come up with a new way of regulating the digital traffic of the 21st century."

And there we are: In the face of opposition from countries such as China, Iran and Brazil, and several African nations, the US is now isolated… with America's traditional ally, Europe, "left trying to find a way of brokering the peace."

You do really wonder which planet the BBC occupies – it certainly isn't the one the rest of us live on. Perhaps Gross needs to be a little clearer next time. The words "get stuffed" spring to mind. Even the BBC might understand that.