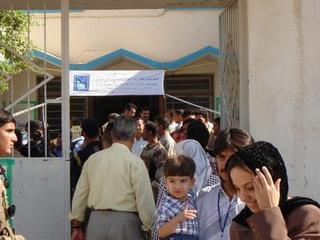 Barely noted by the British media, democracy has once again proved to be alive and well. No, not in Britain, as it happens. Here, in the country where ideas of freedom, political liberties and responsibilites were first developed, we are concentrating entirely on a competition for the leadership of the Conservative Party, fought by people who do not deserve to be anywhere near the top of that once great institution.

As we all know (yawn and thrice yawn), media attention is supposedly on the various youthful delinquencies of David Cameron and his chum George Osborne. In fact, that is not entirely true. With the exception of the News of the World, which, according to Osborne, is for some reason determined to undermine the modernization agenda, what we got was a great deal of tut-tutting. How terrible it is, they all intoned that we should be concentrating on such unimportant issues like drug taking or unfortunte associates in the past.

The Business, which, for some reason, seemed to think that Cameron has handled the whole issue well, even dismissed it all as a question of smoking the odd spliff. Well, of course, it was not just cannabis that people were talking about and Cameron’s coyness makes people suspicious.

The Sunday Telegraph and the Mail on Sunday told us at length about Cameron’s wonderful qualities, all because he has a disabled child. Never mind the drugs, I happen to think it is despicable to use your children, particularly disabled children as a political weapon.

One cannot help thinking that the whole drugs saga with all its ramifications has been an enormous help to Cameron. Just as news filtered out that his fellow MPs did not think too highly of his ability to outline policies and defend opinions, up pops the personal aspect of the political.

Lo, and behold, the media feels sorry for Cameron, who is being hounded; is in awe of his ability to survive the birth of a disabled child; and not a word about his vacuous statements along the lines of “well, of course, people must be free to choose, but we must not forget that it is the state that has to provide people with services”. In other words people must be free to choose within the very narrow boundaries the state sets them. I strongly suspect that Mr Cameron himself does not stay within those boundaries when he chooses health care or schools for his children.

And if Cameron does not get the leadership, well, he can claim that it was all because of those nasty personal insinuations, not because he and his camp are a policy-free zone or because modernization seems to equal old-fahioned post-war socialism that has failed this country and its people. (Insofar as one can make out what it does stand for, that is.)

Just to complete the picture, the Sunday Telegraph informed us that George Osborne is a wonderfully gifted politician, who scintillates at the despatch box (a fact missed by others who have seen him in action) and is a eurosceptic (also missed by the rest of us).

Since Cameron has made it quite clear that he was going to reverse the few achievements that have been made in the Conservative Party over Europe and since he has also made it clear that he wanted to get rid of the “euronutters” and bury the issue as deep as possible (it won’t work, of course, and he will be skewered by it as were his predecessors), it seems rather strange that he would choose a eurosceptic as his closest political ally. But then, the Telegraph does not actually bother to quote Osborne’s supposedly eurosceptic pronouncements.

This, gentle readers, is the politics of Britain today. This and belated reports of certain EU documents that have already been before the relevant House of Commons committee, whose report has apparently remained unread by the Conservative spokesman on foreign affairs.

Several pages after all this stuff we get the story that much of the rest of the world leads on: the constitutional referendum in Iraq.

It would appear that, contrary to all predictions, the voting went well. There was little if any violence, the police, with the help of the local population, remained in control; the turn-out was well over 60 per cent and it was high in many Sunni areas.

Even the New York Times has decided that Iraq is not quite the complete catastrophe described … oh … a day or so ago. The Sunday Telegraph, on the other hand, seemed to think that it was on the brink of a civil war. Sorry, guys, that was last week’s story.

This morning's Daily Telegraph does acknowledge with some surprise that the vote in Iraq went rather well. This surprise is shared by other newspapers. The BBC is busy looking for problems in order to prove that the whole country is one gigantic quagmire. 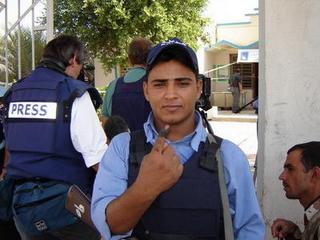 There have been many pictures of Iraqis proudly displaying their inky fingers that showed they voted. But here are some more photos that appeared on one of the Iraqi blogs, that are multiplying in the new environment, Sooni. The blogger, incidentally, gives the following information about himself: “free man”.

Which brings me to a quote published yesterday by the New York Times. The 75 year old Jabar Ahmed Ismail said:

“I voted then, for Saddam, of course, because I was afraid. But this time, I came here by my own choice. I am not afraid any more. I am a free man.”

Troubles are not over in Iraq, any more than they are in Afghanistan. But not only are matters moving in the right direction, it is also clear that the people there know what the democratic process is about. Our own politicians, our own media and, let’s face it, our own electorate, many of whom make rather disparaging statements about the possibilities of democracy in Iraq, seem to have forgotten.

Towards the end of Mikhail Bulgakov’s “Master and Margarita”, one of the greatest of the twentieth century’s novels, there is a conversation between the Devil (Woland) and Matthew Levi. Woland easily bests his opponent by pointing out that good is worthless without evil and the world cannot exist without shadows. We cannot perceive light if there is no darkness.

This is as true in politics as it is in philosophical discussions.