So, why does Norway stay out? 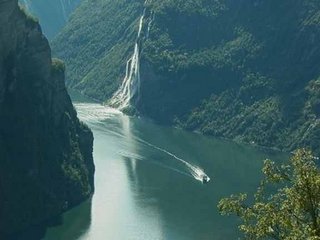 Yesterday’s International Herald Tribune ran an article on Norway under the title of : “In Norway, pros and cons (the cons still win)”. Why is it, asked the journalist that “this increasingly wealthy North European nation remaining outside the fold at a time of broadening European integration?” And hey presto, you have the answer in the question: it is increasingly wealthy and does not need the EU, which is decreasingly wealthy.

Indeed, the article rather sheepishly admits it:

“At present, 54 percent of Norwegians oppose membership, according to a poll published Monday in the newspaper Aftenposten. Their opinion, analysts say, is intimately linked to the broad feeling here that oil-rich, high-growth Norway does not need an economically stumbling European club.

Projections show gross domestic product in Norway growing almost 4 percent this year, up slightly from 3.5 percent in 2004, compared with about 1 percent in the euro zone in both years.”

This is terribly sad for the new centre left Prime Minister, Jens Stoltenberg, and some of his rivals on the right. His left-wing coalition partners are against joining and, one suspects, quite a lot on the right is also that, though they may hedge their bets.

If the article is to be believed, most of the political establishment is in favour of joining but is rather unhappy at the thought of having to ask the people for the third time. They will almost certainly vote no again and that will kill the issue once and for all. Well, not once and for all, perhaps, knowing the determination of the europhiles, but for some years.

The problem is that there are no economic reasons for joining the EU. Norway is part of the European Economic Area and, therefore, it is often said, the country still has to obey the rules of the internal market. Which, according to some pundits makes them into a “fax democracy” because Brussels can simply fax their diktats over.

Whereas, if Norway joined, runs the argument, they would be able to participate in discussions and influence decisions.

This, apparently, cuts no ice with most Norwegians. One wonders why not?

Could it be because they can see that being one of the 25 does not precisely give you much influence and, indeed, the term “fax democracy” can be applied to the member states? (Now that I think of it, this is rather an old-fashioned term. Surely it is now an e-mail democracy that we have to talk about.)

Then again, the Norwegians may well realize that there is a great deal more to the EU these days than the internal market and being part of the European Economic Area still gives you the rights to make decisions about your external trade, foreign and security policy as well as financial matters.

Maybe the Norwegians recognize that when politicians say that Norway in the EU would have a stronger voice on the European level, they really mean that they, the politicians, would strut around in Brussels and feel important.

Then there is the fish. Norway may sell eighty per cent of its fish to the EU as the article points out but it runs its fisheries as it sees fit, which means, almost inevitably, much more successfully than the EU does through the CFP. This, apparently, is not appreciated by the author of the article.

So, it seems, the Norwegians will stay outside the euro-mess, getting ever richer, selling their produce to whomever they like and ignoring the blandishments of their political masters.