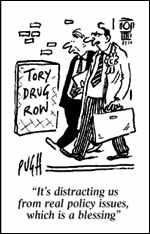 I think The Times political cartoon this morning says it all. Had the Tory leadership contest focused properly – or at all – on the issues, we might have seen quite how vacuous the candidates actually are.

To that extent, David Cameron might actually count himself lucky that the media are concentrating on drugs. Although presenting himself as a "Eurosceptic", our information is that he would not even hold to the current Conservative Party policy on the EU. In particular, he has told MPs that he would not pursue the current policy of repatriating the Common Fisheries Policy, a policy which the last three Conservative leaders have supported.

And, just out of interest, I Googled "David Cameron" and "defence policy" in the news section. This brought up a single entry, which turned out to be a reader’s comment on the Telegraph website, complaining of the lack of a coherent defence policy.

The former Tory shadow minister of defence, Nicholas Soames – he who declared my paper, on the Government's "Europe first" policy for defence, "absolute rubbish" – is a Cameron supporter. That sort of suggests where Cameron might be on the subject. In truth, though, on this and many other issues, Cameron is a policy-free zone.