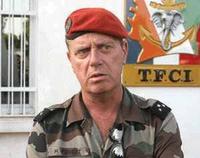 With the Western media focused on Iraq, and only too quick to report the slightest infraction by US troops, a report from Reuters today about the goings-on in the French-occupied Ivory Coast provides a salutary reminder of the less than benign nature of French foreign policy.

The news is of the suspension by French defence minister Michele Alliot-Marie of General Henri Poncet (above), the officer commanding French "peacekeepers" last May when an Ivorian man, named as Mahe, died after being shot by French troops. In addition to Poncet, Colonel Eric Burgaud and an unidentified platoon commander have also been suspended.

At the time of the shooting, the French claimed that dead man was a known highway gang leader who was wanted for crimes including five killings and four rapes. He had been spotted by a French patrol which had pursued and surrounded him, whence he had opened fire and been shot "in self defence".

It now transpires, from a report in Le Figaro, that Mahe was killed in cold blood. The newspaper claims that a platoon had seen Mahe by the side of the road. When the bandit ran, the platoon commander ordered his men after them and they "all opened fire." Some 650 rounds were fired and, badly wounded, the man was left for dead. Some villagers then carried him to the road, where he died. There was therefore no self-defence, the newspaper said, citing several unidentified French officers as its sources.

Le Figaro adds that the original report into the incident was sent to the Ferench headquarters where General Poncet approved it, despite - as one officer claims - being "aware of what happened."

Now, following an official investigation, French Defence Ministry spokesman Jean-Francois Bureau has admitted that: "the facts, as they have been gathered by the command's inquiry, have established that, contrary to what was said at the time, there was no legitimate defence."

Poncet, who is currently based in the southwestern French city of Bordeaux, headed an operation code-named "Unicorn" from May 2004 until June this year, taking charge of 4,000 French troops, supported by UN forces, which had intervened after a failed coup in Ivory Coast in September 2002. He is now being questioned in Paris about an alleged cover-up following the death of an Ivory Coast national in military custody.

Under somewhat dubious circumstances, France sent troops to its former West African colony in September 2002 after a coup attempt against president Laurent Gbagbo during which rebel forces won control of the northern part of the country, despite the reluctance of the Ivorians to accept them, wanting a neutral force.

This is only the latest episode in the unhappy relations between France and the Ivory Coast. This West African country, having been a French colony since 1893, was formally made independent in 1960, although its economic assets and major businesses have since remained largely under French control. The French own 45 per cent of the land and, curiously, the buildings of the Presidency of the Republic and of the Ivorian National assembly are subject to leases concluded with the French. 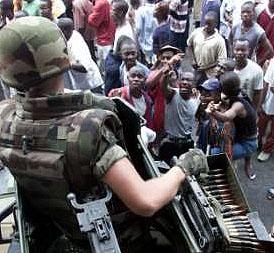 Resentment of French "neocolonialism" has been behind much of the political unrest in the country, which took a turn for the worst last November when the Ivorian air force bombarded a French base at Bouaké, killing nine French soldiers, after president Gbagbo had accused the French of siding with the rebel forces in an attempt to depose him.

The French army had already fired without warning on unarmed Gbagboist demonstrators in November 2003, seriously wounding three of them and then, on direct orders from Chirac, France responded in what was seen at the time as a gross over-reaction - by destroying the country's entire air force, sparking riots in Abidjan. Some 70 Ivorians were killed and over 1,000 injured by French troops firing on unarmed crowds. In a move which further infuriated the Ivorians, the French chief of the general staff dismissed claims of a "massacre", only admitting that his troops might have "wounded or killed a few people", while "showing very great calm and complete control of the violence." 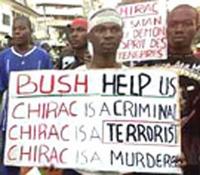 While the African Union troops now stand alongside the French, the UN has brokered a deal which will keep Gbagbo in power for the next 12 months, until further elections, when the pressure for complete French withdrawal will strengthen. Such is the hatred of the French now that – contrary to the scenes elsewhere denouncing Bush, Ivorian have actually been calling for US intervention. Strangely, little of this has percolated into the Western media and, of the latest episode in want has been called France’s little Iraq, from the BBC we hear nothing.