Our defence in their hands 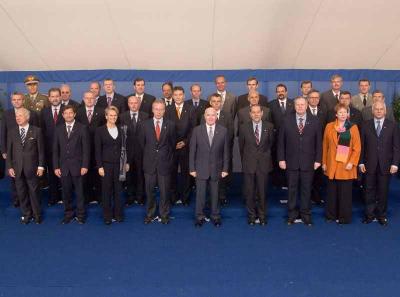 The picture above shows the men and women from across Europe who are increasingly dictating our defence policy.

They are the defence ministers from the 25 member states of the European Union, plus Javier Solana, the EU's "foreign minister". The picture was taken yesterday at RAF Lyneham when they met to discuss "EU defence matters" under the chairmanship of John Reid, representing the EU presidency.

The MoD press release about the meeting focuses on EUFOR (European Union Force) mission in Bosnia and Herzegovina. It was curiously reticent about the substantive issue discussed, which was revealed only in a statement by Solana after the meeting.

According to the news agency AFX, they have agreed a "voluntary" code of practice on defence procurement. Under this agreement, drawn up by the European Defence Agency, defence contracts worth more than €1 million will be advertised on a single electronic portal so companies throughout the EU can tender for them.

This stems from the Green Paper on defence procurement last year, which we highlighted in this posting at the time.

It was then that the Commission challenged the reliance by member states of Article 296 of the Treaty, which allows them to invoke "national interest" in order to exempt defence purchases from the EU's procurement directives. The Commission threatened to consider legislation unless the member states came up with their own plan to "open up the European defence market".

The significance of this cannot be overstated. This is another major step in the onwards march of defence integration. And, if there were any doubts, the importance of procurement in the establishment of the European Security and Defence Policy was set out by the European Union's own Institute for Security Studies, as recently as last May.

Anyhow, like the rest of the media, it is good to see that The Daily Telegraph is on the case, running a penetrating story about soldiers in today's edition. And that's as good as it gets.