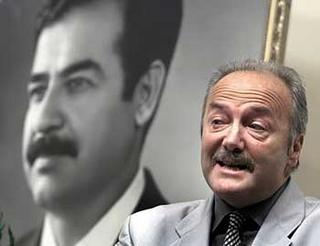 I see George Galloway, Respect MP for Bethnal Green (has he been seen in his constituency since his election or has he been spending his time trying to get on the Peace Mom and Jihad Jane act in the states?) is seething with anger.

Well he might do. There he was, certain of having won his battle with the Senate Committee, simply because he used his normal bully boy tactics of shouting, abuse and refusal to tell the truth to the senators’ courtesy. The journalists loved it. A great circus performance.

They were a little less happy when Christopher Hitchens used the same methods on Gorgeous George and destroyed him in a public debate. Since then Galloway has been out of the picture. Jihad Jane Fonda decided he was bad karma and cancelled all their joint appearances. Sean Penn is still recovering from his watery humiliation.

What Mr Galloway had not reckoned on is that the Senate Committee is somewhat different from the Parliamentary Commissioner for Standards, who has been investigating the MP’s financial affairs with glacial speed since 2003. (To be fair, he has been hampered by the case Galloway brought against the Daily Telegraph, the rather eccentric decision given by Justice Eady and the newspaper’s appeal.)

The Senate Committee has gone on investigating various documents and questioning various Iraqi officials in American custody. And they have found a trail of money being paid to Galloway and his estranged wife out of the great oil-for-food scam.

According to Tariq Aziz, former Iraqi Deputy Prime Minister, the moneys were paid over because Mr Galloway was such a great friend to Iraq. Most of us do not get paid for our friendship but let that pass.

Mr Galloway is now huffing and puffing and challenging the Senate Committee to charge him with perjury. Is he sure they won’t?