The Fragrant Commissar is being "mild and rational" 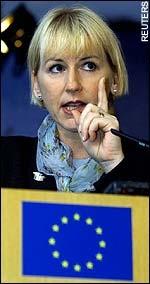 This week-end I took some time out of the boring and repetitive subject of politics and re-read one of my favourite novels, “Pride and Prejudice”. (No, I am not going to see the film, as it seems to be a travesty in every way.)

As I read the Fragrant Margot’s latest blog, in which she tries to abandon her fluffy bunny image and puts herself forward as a serious political … well, not thinker exactly, … but pronouncer of words, I recalled one episode about two thirds of the way through the book. The caddish Wickham who had eloped with Lydia Bennett, has been bribed into marrying her and the question is whether they should visit her family before they go to Newcastle where he has been purchased a commission.

Mr Bennett does not want to see the erring couple but his two eldest daughters, Jane and Elizabeth, argue with him “so mildly yet so rationally” that he gives in. The Wickhams visit the Bennett household, thus giving the plot another spin.

The Fragrant Margot, though not of the intelligence displayed by the two elder Miss Bennetts, especially Elizabeth, does try to argue “mildly yet rationally” in her latest blog. Alas, no Jane Austen, she.

It seems that the Fragrant Commissar has really decided to argue her corner, which is just as well, as many of the comments on her blog are becoming impossibly long. (Not mine or my colleague’s. We stick to a couple of sentences at a time.)

It seems that Margot is a little hurt by the repeated suggestions that she is not one to talk about democracy, as she is not a democratic politician herself.

“Thank you for all the interesting comments on democracy – in theory and practice! (By the way: for six years I was (directly elected) Member of the Swedish Parliament, I served for seven years as a Cabinet minister and as you know Commissioners are nominated by their Governments, questioned and confirmed by the European Parliament.) I agree with those of you who think that the nomination process could be much more open and why not have hearings of candidates in the national parliaments?”

Unfortunately, this comment proves that, as the Fragrant Commissar herself has pointed out a couple of times in exactly the same words, democracy is hard to achieve. Apparently, it is harder to understand.

For the record: what she was in the past is irrelevant. When we say she is unelected and unaccountable we mean now. The people of Sweden might or might not elect her in the future – that would still not make her an elected and accountable politician who should have power in other European countries. And as a Commissioner, she is not elected by anyone, but appointed (by whom is irrelevant) and does not account for her endless activities to anyone.

No amount of hearings of candidates will overcome the simple fact that elected parliaments, assemblies and governments in the member states cannot overturn legislation that is produced by appointed commissioners, the sole source of EU legislation.

Furthermore, something the Fragrant Commissar casually touches on, the method of EU legislation is inherently anti-democratic as it consists of framework directives and long-term plans (such as the ten year plan for financial regulation) that rolls out regardless of elections and government changes.

Oddly enough, she acknowledges this without really appreciating what she is saying.

“In contrast to the people who think the EU is trying to implement the Constitution by the ‘backdoor‘ (not true), other people seem to think that the Commission has stopped work altogether. Also not true. Our work programme of course continues under the existing Treaties.

Until the end of the year there are quite a lot of policy proposals on the agenda, including for example proposals on renewable sources of energy, a strategy for Africa and the free movement of services. Just yesterday we launched a website where consumers can compare prices of roaming mobile phone calls across Europe. It is important to understand that many of the “everyday” issues have to do with making sure that competition rules to allow fair prices for consumers are followed and if necessary we impose fines on companies.

Competition policy is one area where I think the benefits of the EU are clear. Preventing illegal State aid, breaking up international cartels and prosecuting companies who try to drive others out of international markets are something Member States cannot do alone.”

None of this makes all that much sense. After all, a good deal of what is in the Constitution is going through (did anyone mention the European Defence Agency or the European Space Agency). And the work programme is precisely what we complain about. Who gave them the right to impose that work programme on us?

When you set aside all that gumf about strategy for Africa (what strategy and why not leave it to the private sector?) and yet more websites (the Europa one has gone steadily from a user-friendly to a completely impossible one) we come down to competition rules.

Several of the comments on the Fragrant Blog point out that as a matter of fact the Commission has allowed a number of supposedly illegal state aid programmes to go ahead. But, in any case, do we need the EU for that? There is the WTO and there are the various bilateral agreements that seem to work for countries that are actually powering ahead economically.

There is one final outburst of mild rationality when the Fragrant Commissar tries to turn the tables on her pesky critics:

“No answers yet from the EU-negatives about how terrorism can be fought more effectively by breaking up the EU? Or environmental problems? Or international crime?”

There are plenty of answers. She just hasn’t read them. One wonders if the all-purpose Moderator has. There is no need for a European state to deal with any of those problems. In fact, it is not dealing with them but using them to promote its own agenda of integration, not to mention the insane obsession with Kyoto.

None of these problems are limited to Europe. Terrorism needs to be dealt with globally and the United States, together with its allies, is trying to do just that. The EU’s contribution, as opposed to the contribution of individual member states, has so far been little more than nil.

There is, of course, Interpol and there are many links between police organizations in different countries inside and outside the EU, which are far more effective than the various committees and structures set up to further European integration.

In fact, when you think about it, the EU is completely unnecessary for the solution of global problems.