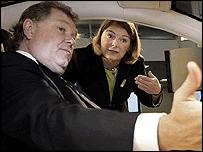 Sir Digby Jones, Director-General of the CBI, will be speaking to his organisation’s annual Manufacturing Dinner in Birmingham tonight. Given the drastic decline in our manufacturing base, it should be very thinly attended.

According to the CBI’s own press release, he is going to use the opportunity to tell "European Union leaders to accept the case for economic reform if they are to deliver wealth and prosperity for their citizens in the era of globalisation."

It is difficult to believe that a statement of such utter fatuity could actually escape from the portals of what claims to be an organisation representing industry. Leaders of governments – EU or otherwise – do not and cannot “deliver wealth and prosperity for their citizens".

Governments are wealth-takers and the best – and only – thing they can do is get off our backs and let people get on with creating wealth. If the director general of the CBI cannot understand this, he is more than a waste of space. The man is an oxygen thief.