The state we're in 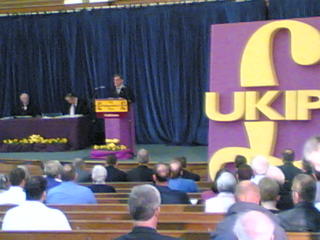 The end of the conference season seems as good a time as any to take stock – before the MPs go back to "work" on Monday and we are submerged in the day-to-day trivia of parliamentary activity.

Of course, with the Lib-Dims kicking off the pol-fest, what seems like months ago, no one can even begin to remember what was said. But then, that was true of the day after their conference.

As to Nu Lab, what endures is the Tony and Gordon show, the conference providing yet another backdrop for that perenial political soap operas. Beyond that, even at just a week's distance, nothing survives in the memory.

With the Tory conference fresh in mind, the dominant theme, inevitably, was the leadership contest, which transformed what would otherwise have been a lack-lustre event. From the rubble emerged an obvious victor – David Cameron – and a loser, the front-runner David Davis, whose chances of winning the glittering prize now seem to be receding fast.

But, lest the myth survive that Davis lost on the strength of one poor speech, read Ferdinand Mount in yesterday's Telegraph, who had this to say of the man:

The Davis campaign is notorious for the ferocity and disdain it shows for its rivals, not least those who might be thought most sympathetic to it. Mr Davis appears to take positive delight not only in roughing up the Euro-sceptics in the Cornerstone (better known as Tombstone) Group, but in letting it be known that he has done so.

If nemesis invariably follows hubris, then the Gods are content. Having assumed that the prize was in the bag, the Davis team are paying the price as their support peels away and looks elsewhere.

There is too much distrust in (and dislike for) Fox for his support to increase substantially, Clarke is not going to go the distance with so many MPs determined to oust him and Rifkind is a joke candidate.

At this point, therefore, it looks like the final run-off is going to be between Davis and Cameron although, as to the final outcome, the reaction of the membership is far from certain. Some are haunted by the "Hague effect" – putting in a man before he is ready – but, with Davis bearing the mantle of a "loser" perhaps the bookies are right to pick Cameron as the front runner.

Talking of jokes, today is the UKIP annual conference, and first reports indicate that the leadership has successfully screwed down the lid on festering discontent, keeping the agenda bland and uninteresting.

The party does, of course, have a handicap. Since the constitution and the euro have been kicked into touch, too many people think that the European Union is a non-issue. However, UKIP's greatest handicap is its own membership – determinedly insular, introspective and largely uninterested in anything outside its own microcosm of its own factional party politics.

For the past week or so, I have been visiting its unofficial forum, Ukipforum.co.uk where the figures tell the story. In the year of its existence, the "UKIP General Issues" forum has attracted 1072 topics and 14,804 posts, taking up 36 pages, while the "European Union" forum has languished at 212 topics and 944 posts, covering a mere eight pages.

Therein, to an extent, lies the problem for the Eurosceptic movement. The mainstream politcos doing their best to take the EU off the agenda, while and the one political party dedicated to our withdrawal from what many of its members call "the evil empire" is more concerned with navel-gazing.

Meanwhile, the march of integration continues and the tranzies are rampant, awarding themselves their own glittering prizes. That, people, is the state we're in.