In The Business today there is a lengthy leader headed "A watershed in British politics". It advances the thesis that the Blair government is unravelling with remarkable speed. Only six short months ago, it writes:

…Labour won an unprecedented third term. Only four months ago, in the aftermath of the triumph of winning the 2012 Olympics and the tragedy of the suicide bombers, Tony Blair still looked and sounded every bit the supreme leader. This weekend, as the clocks go back one hour to herald the arrival of winter, Mr Blair is giving an unwilling but convincing impression of the last divided and directionless Tory government under the hapless John Major: in office but not in power.

The wreckage is accumulating on all sides. In only one month (October) the Prime Minister caved into union demands not to reform public-sector pensions, failed to stop his Cabinet from squabbling over a ban on smoking, published school reforms which were considerably less "pivotal" than he claimed but were nevertheless immediately savaged by the Labour Left (including his own deputy prime minister), watched his high hopes for the British presidency of the European Union (EU) turn to dust, witnessed opposition mount from all sides to his latest batch of anti-terrorist measures and saw economic growth slump to sclerotic euro zone levels.

But what is of special interest to this blog is that another of Blair’s major projects is also unravelling with remarkable speed, largely unnoticed because it has been denied by the very government that is promoting it and ignored by the media. That project is, of course, the European Army.

The trouble here is that, because it is essentially a project that dare not speak its name, one cannot expect a statement to the effect that it has been abandoned, so one must read the runes – but they all add up to an unmistakable picture of failure.

Firstly, in today's Sunday Telegraph, Booker rehearses the story of the in-fighting over the funding of the EU's Galileo satellite positioning system, which suggests that this particular project is in serious trouble.

In the nature of things EU, one can expect a fudge on this, and the two test satellites being prepared at the moment will probably fly. But the very fact that the "colleagues" are dickering over a paltry €400 million indicates that the enthusiasm for Galileo has evaporated. And since it is Galileo, more than anything else, that underpins the autonomous European military force, the inferences are fairly obvious.

Then, there was the news last week of the British government abandoning any timetable for the building of the two super-carriers, which has significant implications for the European Rapid Reaction force, to which they were to be allocated. Since carriers form the core of any expeditionary force, this effectively puts plans for a serious European presence on ice.

Separately, there are strong signs that the Joint Strike Fighter, with which the carriers are to be equipped, is also running into trouble, not least the issues rehearsed on this blog.

Given even less prominence, however, if that was possible, is the fate of the so-called MARS (Military Afloat Reach and Sustainability) programme, a £2 billion scheme to replace the ageing fleet replenishment ships, a project which is a crucial element of the British plans for participation in the ERRF. Earlier this month, the MoD announced further delays in nominating the contractors who would enter into the final competition phase for the contract, and there are no reliable indications as to when the actual building phase will go ahead. 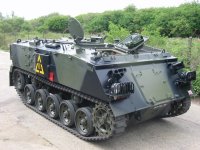 Then there are two "dogs that did not bark". Last August, we were expecting an announcement from the MoD on the allocation of the development contract for the first of the FRES platforms – essentially the next-generation armoured personnel carrier. But, despite expectations that this was to go to the Swedish Hagglunds company, not a thing has been heard since. And now we hear that the venerable FV432 APCs (pictured left), dating from the 1960s and due to be phased out, is to get a makeover. The vehicles are now expected to remain in service with the British Army until at least 2020, five years beyond the date when the FRES vehicles were supposed to be in service.

The other silent "dog" is the replacement for FOAS – the Future Offensive Air System – a joint project with the US, looking at a replacement for the RAF’s fleet of Tornado GR4s which is expected to reach the end of its operational life around 2018. The UK withdrew from FOAS last June and there has been complete silence on alternatives, yet the need to replace the Tornadoes remains.

All this is on the UK front, suggesting that plans for the UK to be able to make a credible contribution to the ERRF by 2010, when the force is supposed to be fully operational, are fading fast.

Furthermore, on the continent, things are no better. In The Business today, there is also a report on how the Dutch – which are also development partners for the project – are considering halving their order for the JSF, throwing the production plans into turmoil. More and more, it looks like this project will never come to fruition.

Elsewhere, we have already recorded the savage cut-backs in the Italian defence budget, while this week’s DefenseNews records that the Germans, under the leadership of Angela Merkel, are looking to slash the procurement budget.

Only France is holding to an increased defence budget, but it remains to be seen how long that can be sustained, before the reality of its own increasing deficit forces her to pull in her horns. From the heady days of the 1999 Helsinki Council, therefore – when the creation of the ERRF was agreed - another EU dream looks like it is running into the sands, and with it Blair’s dreams of being “at the heart of Europe”.

The worst of it is that, having already spent billions of pounds on procuring European equipment to harmonise with the ERRF, the British Armed Forces are being destroyed in order to set up them up to join what will be, in effect, a phantom army.