Some people do still care 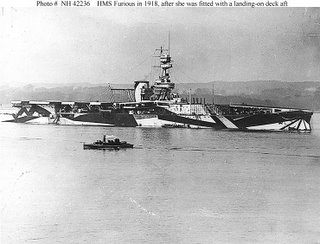 Following on from the sneak announcement by Lord Drayson last week that the MoD had dropped its target date of 2012 for the delivery of the first two new carriers.

We now face the very real prospect that, from the first time since 1917, when HMS Furious was converted to become the Navy's first operational carrier (left), followed a year later by the first through-deck carrier, HMS Argus (below right), the Royal Navy will be without operational carriers. In fact, in terms of naval air power, the Royal Navy of 1918, with its Sopwith Camels (below left) was better equipped than our future navy.

Since Drayson's revelation, there has been a flurry of letters in The Telegraph. Firstly, there was Mike Critchley, of Warship World magazine, complaining that the fleet was continuing to "shrink below safe limits", and today we have two more letters, one from Commander David Burns, commanding officer, HMS Somerset, and the other from Dr Julian Lewis MP, Conservative shadow defence minister. 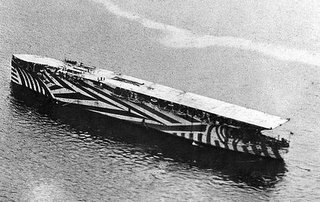 Under the heading, "Without aircraft carriers we'll be sunk", Burns reminds us that, in 1909, there was a public panic over the purchase of new Dreadnought battleships, and the slogan "We Want Eight" caused the Liberal government to step up its warship orders to match German production. Sadly, he writes, I hear no clamour for the more modest "We Want Two". 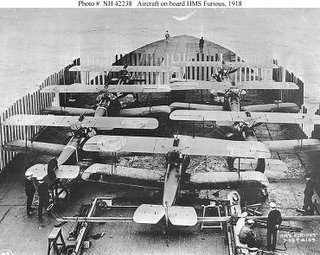 Lewis, on the other hand, asks whether the government think that the threats we now face in the Middle East and elsewhere have diminished rather than increased in the past seven years, over which there have been significant cuts in the fleet, supposedly to pay for the carriers which are not now to materialise on the time scale promised.

In reality, he adds, the pressure on the Royal Navy mirrors that on the Services as a whole: a requirement to do more and more with fewer and fewer resources.

Yet, in a propaganda exercise of truly Orwellian porportions, the MoD has today published a news release to mark the publication of its Annual Report & Accounts, proclaiming: "UK Armed Forces Amongst Most Professional And Best Equipped".

On the specialist military forums, there are a number of interesting threads here, here, here, and here, which collectively suggest that the MoD line has not altogether convinced "our boys".

All together, I suspect the Telegraph and the media in general have grossly underestimated public concern about the progressive weakening of our armed forces – even if the Army does complain about Big Grey Boats (BGBs) hoovering up all "their" money.