Why are we unable to act? 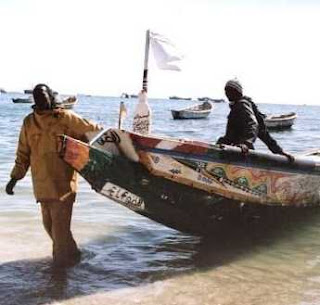 It was only just over a week ago that we wrote despairingly about the media's lack of concern over the depredations of third world fishing grounds.

To give it its due, today The Observer has a long piece which deals with that issue. On the EU's involvement, it has this to say:

Strangely one of the first international attempts to conserve fish stocks, especially for the more easily exploited nations, also became part of the disaster. The United Nations Convention on Law of the Sea, signed in 1979, extended national rights over fisheries to 200 miles from a country's coasts. But it included a provision that, if fish stocks in that zone were surplus to national needs, the country could sell its rights to outsiders.

That convention allowed cash-strapped and sometimes corrupt countries in west Africa to raise funds by letting the industrial trawler fleets in. Since 1979 the EU has negotiated deals on fishing rights with a string of impoverished African countries. Despite the EU's own studies indicating massive and quite possibly irreversible damage to fish stocks off west Africa, these deals continue to be struck.

In 2002, the year an EU report revealed that the Senegalese fish biomass had declined 75 per cent in 15 years, Brussels bought rights for four years' fishing of tuna and bottom-dwelling fish on the Senegal coasts, for just $4m a year. In 2006, access for 43 giant EU factory fishing vessels to Mauritania's long coastline was bought for £24.3m a year.

It's estimated that these deals have put 400,000 west African fishermen out of work; some of them now take to the sea only as ferrymen for desperate would-be migrants to the Canary Islands and Europe. And among the millions of Africans who depend on fish as their main source of protein, consumption has declined from 9kg per year to 7kg.

Much of the piece, however, relies on an interview with Callum Roberts, professor of marine conservation at York University, who believes the answer to global overfishing is to set up a network of marine reserves, "protecting up to 40 percent of the world's oceans in permanent refuges". This, he maintains, would enable the recovery of fish stocks and help replenish surrounding fisheries.

I met Roberts once, a long meeting, when I was working on fishing policy – and read his book. His views are interesting, but I profoundly disagree with them – they are politically naïve and unworkable in practice. That The Observer thus focuses on his views, using the details of the EU depredations as merely a foil, rather weakens its piece.

The real need is to encourage African and other third world countries to reject cash deals with predators like the EU and to develop their own fisheries, with effective policing of their waters. This, as we reported three years ago, almost to the day, was the option exercised by Namibia, which refused to enter an agreement with the EU and had developed from scratch an industry worth $10 billion.

What is useful about The Observer report though is that it puts a figure on the cost of the deals, estimating that 400,000 west African fishermen have been put out of work, "some of them now take to the sea only as ferrymen for desperate would-be migrants to the Canary Islands and Europe" – many of the migrants themselves being displaced fishermen.

This was precisely the point we were making two years ago, but the theft still goes on.

Tellingly, one of the reasons the Euro-luvvies give for British membership of the EU is that we are then able to exercise "influence" within the Community. Yet, when it comes to exercising it over this vital issue, which costs so many lives and is one of the main drivers of economic migration from west Africa, the UK is nowhere to be seen.

Not for the first time, we are asking why we are unable to act to stop this obscene exploitation of vulnerable peoples. We keep asking, and the very fact that we get no answers tells you all you need to know about our legendary "influence" within the EU.