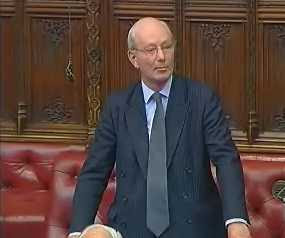 Business in the House is managed through "usual channels", by agreement between the government and the opposition parties. None of these want to engage in a high profile debate about the constitutional Lisbon treaty.

Is it entirely a coincidence, therefore, that the major votes in the Commons on the Human Fertilisation and Embryology Bill were scheduled for the same day that the Lords were voting on whether there should be a referendum on the treaty?

Whether it was or not, the proceedings in the Commons effectively drowned out the debate in the Lords on the amendment introduced by Lord Blackwell. So, while the media gorged themselves on the question of whether children born with the aid of IVF should have fathers, the debate over the referendum merited only a routine report on the BBC website and very little else.

Blackwell's motion was defeated by 60 votes - 195 votes to 135 – leading the Tory leader in the Lords, Lord Strathclyde, to said there was "something very fishy" about the government's refusal to back its own policy. He added: "This astonishing vote will arouse deep suspicion in the minds of the public in view of the broken promises from Labour and Liberals over a referendum on the Constitutional Treaty."

Unfortunately, the passage of the vote has passed with such limited reporting that the event is virtually unknown to the public. Rather than "deep suspicion", therefore, the vote will attach next to no reaction.

Nor was there any reaction to a later vote, taken after an amendment had been tabled by UKIP peer Lord Pearson calling for a referendum on Britain's continued membership of the EU. This was primarily intended to smoke out the Lib Dims, whose policy it is to call for such a referendum. But, true to form, the Lib Dims bottled out, abstaining from the vote.

While the Lords were our last, best hope of forcing a referendum, as the issue drained into the sands, expectations have reduced and, of the main referendum vote, there was little chance of success.

It is not quite yet over. The Conservatives are expected to make their final push for a referendum when the ratification Bill reaches its report stage in the Lords on 4 and 9 June, with a vote expected on 11 June - the day before Irish voters go to the polls in their referendum. But with Lib Dim peers expected to vote with the government, their chances of success then are equally limited.

Then, as far as the UK goes, it is all over. The Bill will go for Royal Assent, signalling the "assent" of Parliament to the ratification of the treaty.

But, has the low-key media coverage been part of a broader conspiracy to bury the debate? Of course not. As the man said, "Ceci n'est pas un complot."