It was only a matter of time … 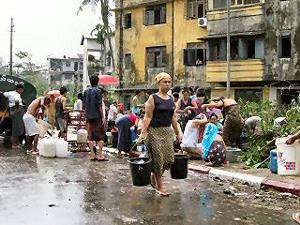 …before someone blamed the Burma cyclone on global warming – and it just had to be al Gore.

Andrew Bolt picks it up on his blog, noting that, "Al Gore is already feeding on Burma's dead." Using tragedy to advance an agenda has been a strategy for many global warming activists, he adds.

Bolt cites Gore, who did his shroud-waving on NPR's 6 May "Fresh Air" broadcast. Said the former vice president:

And as we're talking today, Terry, the death count in Myanmar from the cyclone that hit there yesterday has been rising from 15,000 to way on up there to much higher numbers now being speculated … And last year a catastrophic storm from last fall hit Bangladesh. The year before, the strongest cyclone in more than 50 years hit China - and we're seeing consequences that scientists have long predicted might be associated with continued global warming.

Even the most diehard warmists tend to fight shy over attributing particular catastrophic weather events to global warming but, as we know, this man has no shame. Next thing you know, he'll be blaming the Chaiten volcano on global warming.