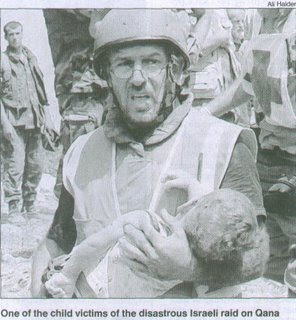 From the academic who wrote this book, an exploration of the fauxtography phenomenon and the "blogstorms" that exposed it.

The paper includes an analysis of the role of EU Referendum in the lifting the lid off Qanaqate.

It is longish (22 pages) but well worth reading as a clinical analysis of an important series of events, where the blogosphere took on the MSM and challenged its partisan and mendacious reporting of the Lebanese War in the summer of 2006.

It is interesting that, of the blogs mentioned, most were American. This was the only significant British blog that took up the issue, which was largely (with some honourable exceptions) ignored by other UK-based political blogs. If that is a reflection of something, I am not sure quite what. Perhaps, others can explain the narrowness of vision that seems to pervade our blogosphere.

In the US, blogs have continued to challenge the establishment and the media, creating a powerful political constituency of their own. In contrast, the UK scene is progressively being taken over by media blogs (the so-called "clogs"), which are seeking to dominate (and dictate) what should be an independent and vibrant new medium.

One day – if they have not already – someone will write a thesis on this, in a nation that claims to be the home of free men and women, where we are in fact hopelessly conformist. Why that should be, I do not understand – and perhaps never will.