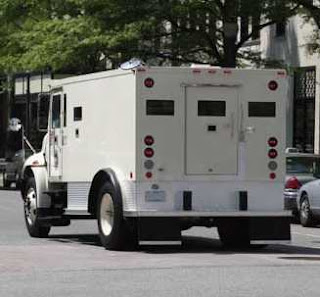 A delicious little spat is developing between our provincial government and our supreme leaders in Brussels – who are demanding that an expected £1.6bn windfall is spent on combating climate change.

This is the "snake oil tax" otherwise known as the EU's Emissions Trading Scheme which creates a market for carbon-permits. At the moment, these are handed out free to industry – from which it profits greatly. But, from 2012, the national quota will be auctioned off to the highest bidder, the UK proceeds going straight into the Treasury.

So far, according to The Independent, the responsible department, none other than the Department of Environment, Food and Rural Affairs (Defra) is refusing to agree that the income should be spent on carbon-dioxide reduction schemes.

With visions of the Treasury hiring another fleet of armoured security trucks to gather up the proceeds (the true symbol of the global warming industry - pictured), the Greenies are incandescent. They are arguing that, without hypothecation, money raised from green taxes could end up being spent on road building projects or other initiatives that could actually exacerbate climate change.

But a spokeswoman for Defra is saying that the (provincial) government has a policy of not hypothecating any tax revenues, on the grounds that doing so could distort spending priorities. "We don't even know yet what the carbon price will be," she says. "Money raised from these auctions will be channelled across all government spending departments."

Clearly though, this does not satisfy our masters in Brussels, who are already crafting a directive that would make it illegal for member states not to earmark ETS income for "green measures". And so, says The Independent, the government "is on course for an embarrassing showdown".