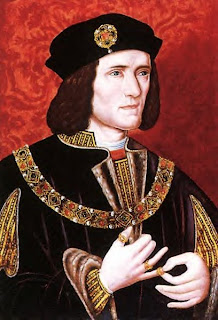 One must assume that some of our readers may have noticed my absence from the blog in the last few days. The truth is that I was spending my time in the fifteenth century and found it hard to show interest in the twenty-first.

All right, I shall explain. The Royal Shakespeare Company brought their much praised Histories cycle to the Roundhouse and this was the last week-end of their performances. I started with Richard II on Thursday evening, watched the two Henry IVs on Friday morning and afternoon and, having already seen Henry V separately, spent Saturday on the Henry VIs or the Wars of the Roses. Richard III I am giving a miss. It is a worse play than the others, considerably less accurate and a travesty on a very capable man and reasonably good king.

Actually, it is quite a good idea to spend some time with Old Will, who knew far more about politics than most of us will ever manage. If you want to learn about it go to Shakespeare’s plays, Macbeth or the Histories by preference.

What is to be done with an Archbishop of York who leads rebellious troops? How to sort out nobles whose quarrels prevent victories in France? How to tell if one near to you is plotting your downfall? It’s all there in those plays.

Furthermore, if you want to know about propaganda, then the Tudors should be your masters. Their ability to create an image of themselves as the rightful rulers who rescued England from chaos and tyranny is supreme; their calumny of the Yorkist kings is unrivalled; and their creation of the evil hunchback Richard, the usurper who drowned England in blood and killed his nephews in the Tower is unmatched.

The truth is considerably more complicated. The Yorkists had a far better claim to the throne; the Lancastrians were rebellious usurpers and the Tudors had no claim at all, which explains their frantic search for legitimacy.

Blood did drown England for decades but it is hard to apportion blame between sides in a civil war. Even Shakespeare, consummate Tudor propagandist that he was, found it hard to make the Lancastrians righteous. If anything, the series is mostly on the Yorkists’ side. Henry V, the great hero, is extolled but shown to have severe misgivings and is as ready as his father to execute those who fight for the rightful heir and to imprison said heir.

The two Yorkist kings were able men, talented administrators, generous to their opponents, once on the throne, and popular in the country. Even my school textbooks acknowledged that most of the administrative reforms the Tudors boasted about were started by their two predecessors.

Of course Shakespeare does not say that. Edward IV is a wanton carouser and Richard is evil, evil, evil, which makes that last play a poor one. There is no interest in pure and unexplained evil.
What of Richard Crouchback, that deformed imp of Satan, the image created by Henry VII’s Archbishop of Morton (of Morton’s Fork fame or infamy), Polydor Vergil, Henry’s court historian, Sir Thomas More, Henry VIII’s courtier until conscience smote him and William Shakespeare, whose play may not be good by his standards but is still better than anything written by his rival dramatists?

Sadly, all untrue, even the fact that he had a hump. No evidence, not in contemporary writings, not in that astonishing portrait in the National Portrait Gallery. He was an able and courageous soldier, a skilled administrator, particularly in the North of England while his brother was king, a fond father and dutiful husband, popular with the ladies (several illegitimate children) and a well-loved king who was brought down by plots and a foreign invasion.

What of those princes? Well, there was doubt, widely accepted about their legitimacy and having a child on the throne of England would not have been a good idea. See Richard II and Henry VI. But murder? The evidence is inconclusive and points to Henry VII as much as Richard. There is some evidence that they outlived Richard and Henry would have been much more anxious to get rid of them as he married their sister (all that Shakespeare accuses Richard of York of wanting to do).

Furthermore, as history books used to say coyly (as near as I can recall from memory), it was the settled policy of the first two Tudor kings to rid themselves of all who might have had rival claims to the throne, particularly of surviving members of the York family. In other words they deliberately carried out mass murder through judicial means (mostly). Many of those they got rid of were children so a couple more princes would not have made much difference.

Yet it is Richard whose name has, despite the best efforts of historians, remained a byword for infamy. There’s spin for you. Eat your heart out, Alistair Campbell.

Back to the twenty-first century with normal service resuming. In fact, better than normal has been recently.
Posted by Helen at 11:02