A confusion of policies 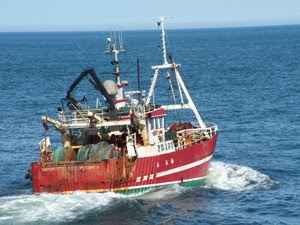 A jolly little spat is developing between the Scottish "government" and Whitehall over control of Scottish fish stocks.

Scottish National party's (SNP) fisheries minister, Richard Lochhead, has introduced a moratorium on the sale of quotas held by Scottish trawlers while he carries out a review of fishing licences and quota controls. The outcome could be measures which greatly restrict the rights of English vessels to fish in Scottish waters.

According to The Guardian, this has led to accusations from Whitehall that Scottish nationalist ministers are accused of illegally trying to seize control of fish stocks.

Hilariously – if that is the way it takes you - Barries Deas, the chief executive of the York-based National Federation of Fishermen's Organisations, is calling in aid his arch enemy, the EU commission.

"This move is provocative, highly irresponsible and probably illegal," he says. "There is no such thing as Scottish or English quota. There is UK quota. If the Scottish executive has any doubts over this, a brief telephone call to the European commission should allay any doubts."

The UK's fisheries minister, Jonathan Shaw, has formally warned the Scottish executive he believes the moratorium is illegal and had "significant concerns" that the quota reforms breached its powers under devolution, which gives Scottish ministers limited rights to decide their own fisheries policy.

Lochhead is unrepentant. He maintains that his "reforms" are intended to protect a vital industry under intense pressure from cuts in quotas, competition and soaring fuel costs. He wants to overhaul the current quota rules to favour Scottish-based skippers and fleets, and implies he wants to permanently restrict access to non-Scottish trawlers.

Despite their being part of UK waters, Lochhead claims that the fishery is a "national asset" for Scotland, declaring that, "It is vital that we take steps to safeguard the historic rights for future generations."

That much is wishful thinking as the EU dictates that fisheries are a "common resource", allowing the commission and the 27 member states to decide which nations' fleets can exploit the waters, the amount of fish they can catch and the conditions under which they can be caught.

Thus, Lochhead says that the Scottish government is also trying to withdraw from the EU common fisheries policy. Ministers in London said that this was impossible, since it is the UK government which was the member state, not Scotland.

Jim Murphy, the Foreign Office minister for Europe, said leaving the common fisheries policy contradicted the SNP's claims that an independent Scotland would be a full member of the EU. "It's time they were honest with the people of Scotland - their policies just don't add up," he said.

Murphy may have a point. The SNP has always sought an “independent Scotland within the European Union – a contradiction of terms is ever there was one. In wanting to break away from the CFP, this party of independence is simply showing that it has yet to grasp the realities of what is meant by membership of the EU.