Where is that international community? 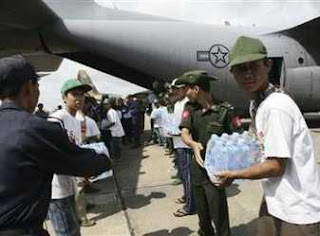 First there was the Burmese cyclone, now we have the Chinese earthquake. What do these events have in common? Yes, they are likely to result in many deaths and no, we are not going to know how many for a long time, if ever. But that is something they share with the far greater disaster of the tsunami two and a half years ago.

There is something else they have in common - the sight of the international community standing by helplessly, wringing its hands and being unable to help. We are witnessing hysterical outbursts from Oxfam and a certain amount of temporary smugness from the Red Cross.

At the time we covered the tsunami and the aid efforts extensively on the blog [scroll down for the stories]. One thing became clear: delivery and distribution of aid was rapid and efficient as long as it was done by the US navy, the Australian navy with support from the Indian navy and the Japanese air force.

As soon as they had finished their work and moved out, the NGOs, who had until then spent their time and money bickering and trying to ensure that their staff had "adequate" working and living conditions, moved in, the aid efforts largely disintegrated and the huge amounts of money given by generous people in Britain and even more generous governments who are always ready to use taxes for various purposes, were wasted.

This time the American navy, who is standing by, as, I have no doubt, are the Australian and Indian navies, is not allowed in. But that should not matter. We have the international community; we have the UN; we have the NGOs; we have advertisements in all the newspapers and all the Oxfam shops, pleading for money as there will be 1 million, 2 million, however many millions of deaths. People will undoubtedly give because people are generous and rarely bother to think when they read horror stories.

The truth is that Oxfam is collecting money, yet again, under false pretences. It has no idea how many people will die. It cannot get the aid in and the money, so generously given in response to its appeals, will either be spent on accommodation for its staff around Burma or wasted on aid that never gets to the necessary recipients.

Mrs Thatcher has been accused of saying that there is no such thing as society. What she actually said is that society is not an abstract entity but consists of people. Whenever society is expected to achieve something, the question of who in reality is going to do that achieving is forgotten. The most obviously tragic result of that attitude has been "care in the community" with thousands of people with various mental disorders and inability to deal with life, thrown out on the streets.

In the same way, it is time to understand that there is no such thing as the international community, no matter what we are told by the tranzis. It can do nothing. Neither the UN nor the NGOs can help people if the governments in question are not co-operating. As it happens, they cannot help people in other circumstances either or only very rarely.

Liberal interventionism in the name of humanitarian principles can be done by countries or by groups of countries, with the practical side of it carried out by men and women in the uniforms of those countries. All else is Scotch mist.

UPDATE: There is some good news. The Burmese government (or junta) has allowed a US military aircraft in with aid. Possibly, this will lead to some efficient transportation and distribution of badly needed aid, not to mention some assessment of what is really going on in the country.
Posted by Helen at 16:22