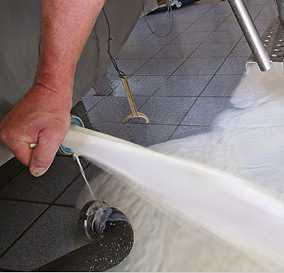 It is not only fishermen who are protesting throughout Europe. In eight countries, including Switzerland, dairy producers have gone on strike, throwing milk away, according to Reuters (via The Guardian) and many other reports.

The protests started in Germany earlier this week, when upwards of 70,000 dairy farms, out of 100,000, began to boycott dairy processing plants, complaining of low prices, down from their 2007 level of nearly 50 euro cents to as low as 27 to 35 cents per litre. An estimated 10.6 million gallons of milk — up to 60 percent of the country's production — was dumped, fed to other animals or used for fertiliser on Wednesday alone.

About 150 farmers parked tractors round a dairy factory north of Hamburg, preventing trucks coming and going, at the Allgaeuer cheese factory in Kimratshofen, southern Germany, the production of Emmentaler cheese had been cut and at the Mullermilch dairy in Weihenstephan, 9,000 dairy farmers demonstration outside, stopping milk deliveries completely.

The Reuters report suggests farmers are blaming the price falls on an EU decision made in April to raise national milk production quotas by two percent – but this seems to be the only report making this charge. The increase does not kick in until 2009, so it is far too early to have had an effect.

Others are blaming processors and supermarkets for cutting their prices, and feeding the cuts back to farmers, but Romuald Schaber, the president association of German dairy farmers, BDM, says, "The problem is that there's too much milk on the market, which enables the supermarkets to depress the price."

What is not explained is why there should currently be an oversupply, particularly in Germany, where the protests are centred. Market reports on the milk industry suggest that EU supplies have, until recently, been tight, and while production has been starting to increase, high input costs, including feed and energy, are dampening down the supply response.

On the global front, current reports confirm that supply remains tight, with an Australian source reporting, "We have less milk to export, but the world market is very short of products, so we are getting very good prices for the product that we do have."

There is no obvious reason, therefore, why there should be a sudden oversupply in Germany and other European countries, with farmers experiencing a precipitous decline in their prices. In fact, the reason why the EU has proposed an increase in the milk quota is to accommodate growing global demand for milk, especially from booming Asian nations.

Interestingly, the price spike in 2007 was triggered by high demand from China, which was then importing one-third of the world's traded milk, increasing its imports to 298,600 tons. Furthermore, the main European exporter was Germany. Its exports that year brought in sales of €2.9 billion between January and June 2007 alone.

But, in what seems a perverse indicator, Germany's national farmers' union – which is not supporting the boycott - is now calling for the EU to export more milk.

There are no current data on milk exports to China but, putting two and two together – in the hope of making four – it does not seem unreasonable to surmise that there could have been a fall-off in Chinese demand. Yet this, on the face of it, would seem unlikely, as one of prime minister Wen Jiabao's targets is to increase dairy consumption.

Without that, though, the current price collapse – driven by an excess of milk - does not make sense. Something is going on here. I think we should be told.