A bad day for MEPs 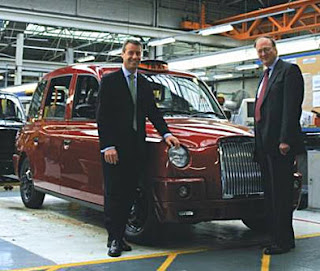 After the hammering they have taken in the News of the World, the Europhile Independent on Sunday also pitches in.

It accuses a number of Tory MEPs of "routinely accepting gifts, wages and hospitality from companies they are charged with regulating." These include West Midlands Conservative MEP, Malcolm Harbour (pictured – on the right in the pic - promoting a taxi manufacturer). He is a leading figure in the debate on carbon dioxide and fuel efficiency in Brussels but, since 2004, Mr Harbour has been loaned 18 cars by the industry. Also courtesy of the car industry, he has attended Grand Prix races and received cross-country driving instruction.

Another self-declared beneficiary of the car industry's generosity is Martin Callanan, a Conservative MEP for the North-East. In 2006, he was given a discount by Ford when buying a new car. Along with a colleague, he recently tabled a crucial amendment to a report on CO2 emissions for cars. It gave manufacturers three extra years to prepare for the limit, a move described as "disastrous" by Green MEPs.

Next in line is Giles Chichester, Tory leader in the parliament. He is president of the European Energy Forum, which promotes the interests of the oil, gas and nuclear industries. In May 2007, he was the guest of nuclear company Areva at the America's Cup race off Valencia. Mr Chichester says the trip had no bearing on his long-held pro-nuclear views.

Finally, there is Conservative Scottish MEP John Purvis, vice-chairman of the "influential" Committee on Economic and Monetary Affairs. He is a non-executive chairman of Belgrave Capital Management, a recruiting arm of a Swiss company that invests in hedge funds. In 2003, Mr Purvis was the rapporteur who proposed a "light-handed EU-wide regulatory regime" for the hedge-fund industry.

As one might expect, he sees no conflict of interest – but then, they never do.