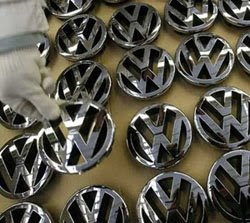 It is not often that we find ourselves dealing with a story that we first reported on in July 2004, which is still running unabated.

This is the eternal saga of what is known as the "VW Law", whereby German Länder maintain "golden shares" in individual enterprises – Volkswagen being one – thus preventing their take-over.

As we left it in July last year, the ECJ had ruled against the Land of Lower Saxony, after its refusal to relinquish its shares in Volkswagen had been judged in contravention of EU treaty obligations on the free flow of capital.

At the time, we noted that this was challenging the core political structure of Germany, where regional loyalty is much stronger than is any feeling towards the federal government - almost a case of the irresistible force meeting the immovable object.

We then also noted, in what was a highly controversial issue, the somewhat muted response, especially as it appeared that Porche was poised to take over VW, thus breaking the Saxony grip. However, in speculating that this was a case of the dog that did not bark, we spoke too soon. It seems that Saxony has not rolled over after all.

Reported by AFP, it seems that, having accepted the ECJ’s ruling that its "VW Law" contravenes the treaties, Saxony did repeal the law, only to set in motion a new, very similar law. This has exactly the same effect as the old – maintaining a veto over take-overs.

Predictably, the EU commission has reacted sharply, its spokesman, Oliver Drewes, declaring that, "If the current situation is formalised, the European Commission has to start a procedure for non-respect of a court ruling on this matter."

"There is not room for wiggle," Drewes adds: "Basically what the commission would expect is that the court ruling is fully respected and implemented … We will now have to clearly see what the final German law is going to look like," then warning: "If it's going to look the way it seems to be then there is no other way than to go to the court again."

What is so fascinating about this issue is that, for all its communautaire sentiment, Germany – or its regions – are just like the rest of us. When a core national (or regional) interest is threatened by EU law, the former rather than the latter prevails.

The action of Lower Saxony should, therefore, give us some hope that the EU commission will eventually over-reach itself and confront the brick walls of irreconcilable national interests, which will bring the integration process skidding to a halt.

One need not hold one's breath that the UK will be amongst those that challenging the EU. When it comes to the EU, our political élites seem to have forgotten the meaning of these words.