Pie in the sky? 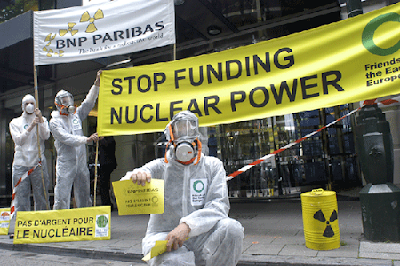 In what has the potential for causing no end of controversy, European power companies, we are told by AFP, are calling for "urgent EU-wide moves" to clear the way for new nuclear plants.

Speaking on the second, final day of the European Nuclear Energy Forum, Electricite de France board member Bruno Lescoeur, referred to the $135 barrel of oil, declaring "it is urgent to act… Industry cannot wait for a gradual approach to lead to convergence (in harmonised safety rules)."

Fed up with "a patchwork of technical rules for plants and their construction," which are delaying building new reactors, companies want standard certification procedures for new nuclear plants. The Forum thus called for the EU commission to come up with a clear directive.

Dr. Werner Zaiss, of the nuclear group, Foratom, spelled out the problem, telling AFP that, "At the moment you can count on five years to get permission to build a plant and another five to build it." Common rules would also cut costs.

Then there was board member of German power company, RWE, Gerd Jager said the challenge of getting European harmonisation must be faced. "We must go there. It brings the possibility of increasing public acceptance (of nuclear power) and stability, and strengthens Europe's role in nuclear power."

One can immediately see the logic of this position. With what is largely an international industry, having to go through the approvals procedures for a nuclear reactor in one country is bad enough. But when you then take exactly the same design to a different country, and have to go through a completely different set of procedures, this is both time consuming and expensive.

Nevertheless, one wonders whether any member state is quite ready for the EU to dictate what nuclear power stations are constructed, and under what circumstances. And, given that there is a "common standard", would member states like Germany be able to refuse the building of a nuclear plant if it conformed to "European standards"?

When one recalls the difficulty the EU is having enforcing its own rules on the approval of GM seeds, it is also hard to envisage member states going this far on nuclear. And putting the EU in charge of forcing through a nuclear programme would almost completely destroy its credentials with the Greenies – who are already totally opposed to nukes.

That alone might make this proposal worthwhile, even at the price of more integration – in the short-term – the longer term effect being to increase the unpopularity of the EU. Somehow, though, this is such a contentious issue that one cannot really it taking off, even if would be fun watching the commission try.

But then, would you want the authors of the Common Fisheries Policy in charge of nuclear safety?