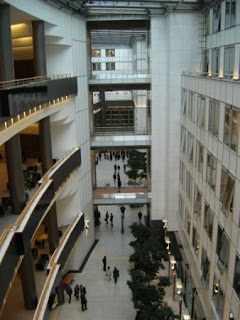 Conservative Home is on the case of the plot to stop the Tories leaving the EPP group in the EU parliament.

Although, in the grander scheme of things, the Tories leaving the EPP may seem a very minor issue, this is the one solid "Eurosceptic" commitment David Cameron made during his election campaign, one which was attributed to bringing the Eurosceptic wing on board. For him now to be unable to honour that commitment would have significant ramifications, reaching far beyond this immediate issue.

That apart, this is in fact quite an important issue. As the EU parliament grows in strength with the constitutional treaty, the one thing the "colleagues" really fear is a Conservative Party in an independent group, able to dictate its own agenda. It would have a natural "pull" for dissidents and break up the cosy consensus that prevails.

The "colleagues" have but one opportunity to pull this off before the next euro-elections, and will thus bend every rule – which they have been doing – to get these rule changes in place. Bruno Waterfield did us a great service in bringing attention to what was going on, but the real threat has yet to be fully recognised.

UPDATE: England Expects offers his take on the affair.