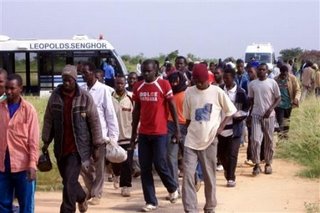 Reuters is telling us that the EU has announced a 35 percent rise in development aid to poor countries in Africa, the Caribbean and Pacific (ACP), "as part of efforts to stem migration into the wealthy bloc". Thus, the "aid package" to be shared among the 77 ACP countries over the 2008-13 period will total €22 billion ($28.1 billion).

The announcement was made as EU and ACP ministers met in Papua New Guinea to discuss migration together for the first time. "Managing migration for the benefit of development is a new priority of EU development assistance," says a commission statement.

But, as we have pointed out, here and here, the current wave of migration to the Canaries, which has triggered this sudden "generosity", is entirely due to the effect of the predatory third country fishing agreements, which are depriving Africans of their livelihoods.

The immediate answer, therefore, is to stop stealing African fish. Scrap these deals and help these countries develop their own fishing industries, complete with processing facilities which give the added value.

Instead, having created the mess – with the use of a not inconsequential sum of taxpayers' money – the EU is now proposing to spend even more taxpayers’ money, much of which will go nowhere near the people who really need assistance, and which will do nothing to tackle the underlying problem which was largely created by the EU.

Nevertheless, the EU will be able to bask in a warm glow of smug, self-congratulation as it parades its largesse as evidence of its social conscience, while the media and politicos avert their gaze to the growing crisis as still more thousands of Africans brave the perilous sea journey, and many more thousands die.