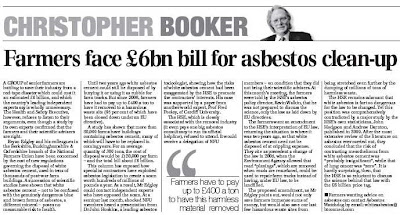 In his column today reports how British farmers are facing a potential bill of £6bn bill for an "asbestos clean-up" which the country's leading independent experts say is wholly unnecessary.

This, once again, is another example of the dire combination of EU law (which lumps harmful blue and brown asbestos in the same category as white, which poses no measurable risk to health) and the enthusiastic intervention of British officials – in this case the Health and Safety Executive.

Writes Booker, until two years ago white asbestos cement could still be disposed of by burying it or using it as rubble for farm tracks. But since 2006, farmers have had to pay up to £400 a ton to have it removed to a hazardous waste site (95 per cent of which have been closed down under an EU directive).

A study has shown that more than 50,000 farms have buildings containing asbestos cement, many of which will have to be replaced in coming years. For an average quantity of 300 tons, the cost of disposal would be £120,000 per farm - and the total bill about £6 billion.

The costs arise from the huge scam perpetrated by asbestos removal contractors, who profit hugely from the HSE/EU intervention. But what is particularly dismal about this whole affair is the refusal of either the rest of the media or the opposition to get engaged in what is very clearly a scandal.

Already, an untold amount of money – most probably over £100 million – has already been wasted on this scam, affecting buildings like the Albert Hall, as well as thousands of industrial and domestic buildings yet it is only Booker, from his ghetto in The Sunday Telegraph, who has really pursued the story.

This adds to my pessimism over the fate of the eurosceptic movement. There could not be clearer evidence of the lack of harm associated with white asbestos, and the nature of the scam being perpetrated. Yet, if neither the media nor the politicians are prepared to engage, what hope is there for the bigger issue?