No newts is good newts … 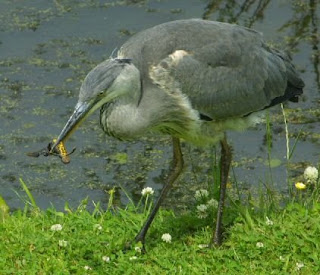 But, in this case, reported by The Daily Mail, Leicestershire Council is less than happy, having spent £1million on safeguarding a colony of great crested newts – which did not exist.

The story is also reported by The Daily Telegraph, and neither newspaper – for once – has any problem mentioning the elephant. The Mail refers to the amphibians being protected by EU law and the Wildlife and Countryside Act, making it illegal to capture or kill them or disturb their habitat, while the DT cites council leader David Parsons, saying: "It's completely unacceptable. I've written to the minister concerned, and all he can say to me is that it's because of European Union regulations."

Anyhow, this example of egregious waste occurred when Leicestershire County Council delayed a major road-building scheme for three months after evidence of great crested newts was found in ponds on the site. Yet, after the authority paid hundreds of thousands of pounds for special newt-fencing and traps, not one of the "rare" creatures was discovered.

The action had been taken on the strength of a report from "environmental experts", which found there could have been between one and 10 of the 6in amphibians on the site. What turned out to be the non-existent colony was thought to be located near the £15 million Earl Shilton bypass in Leicester so a 1,000-yard exclusion zone was erected around ponds. Further tests were carried out and hundreds of thousands of pounds was spent on newt-proof fences and traps to move the amphibians when hibernation ended in spring.

Yesterday, officials – who had already spent the money - admitted it was all "down the drain" after more tests showed there were no great crested newts at all.

However, huge though this sum might be, it is by no means the most expensive newt scam. As we reported n an earlier post, that record goes to Orton brick pits, near Peterborough in 1996. There, a new town of 5,200 homes required the relocation of 15,000 newts, at a cost of £3million – with none of the newts surviving the move.

Nevertheless, Leicestershire council now probably holds the record for spending the most money on no newts at all – small comfort when the farming and rural consultancy ADAS estimates that, if you take in species such as bats, lizards as well as the newts, dealing with EU-protected species costs UK developers is a staggering £15 million a year.

It really is outrageous that all this money is wasted on complying with EU law, when we could have given it to the MoD, which can waste it so much more efficiently.

(The pic shows a heron eating a great crested newt – is it breaking EU law?)