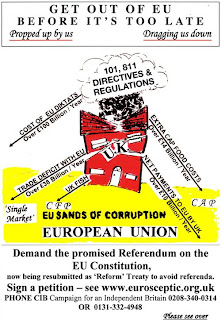 Continuing my series of essays on the general theme of "the death of euroscepticism", in Part I, I concluded with the promise that I would look at what we needed to do to put it back on the map – to resurrect the "movement" and carry the anti-EU campaign forward.

By coincidence, as I was brooding about the content of this essay, in the post came a leaflet (illustrated - click to enlarge) from that admirable organisation, the Campaign for an Independent Britain (CIB), enjoining its putative readers to sign a petition on the constitutional Lisbon treaty.

The organisation, however, is admirable only for its longevity and the perseverance and dedication of its members. The leaflet itself, apart from the amateurish graphic, is a classic example of what we should not be doing.

What value is there in reminding people of that which they either know already, and accept, or reject entirely? More likely though, the bulk of people who read such a leaflet – those genuinely outside the eurosceptic "loop" – may be sympathetic in a lukewarm way, but hardly driven to action. And if they are motivated to sign a petition, what then?

In the category of "what needs to be done," therefore, one very obvious simple suggestion is that the "movement" needs to up its game – it needs to cease and desist producing crude, meaningless leaflets and other material which, one suspects, merely reinforces the "loony" image that euroscepticism has so laboriously and expensively acquired.

That, though, is only the small part of it. What comes over from this and the rest of the genre is the unremitting negativity. The EU is bad, we are told, in any number of ways, at varying length and in greater or lesser detail. In that sense, EU Referendum is a refined version of the genre. We go to great lengths, expending huge effort, to find more and inventive ways of saying the same thing … the EU is bad.

So, might you say, does much of the political literature, and especially many blogs – which specialise in one way or another in saying "New Labour bad", or "Gordon Brown bad". But there is a difference. In a few years time, we will have an electorally mandated reshuffle general election. We can – and probably will – get rid of Brown and his cronies.

On the other hand, there is no election, no referendum or other electoral device currently available to us which would cause the EU to be discarded. Like an elemental force of nature, it has the air of permanence. Complaining about it is rather like complaining about the weather – satisfying sometimes and occasionally entertaining, and certainly useful as small-talk. But ultimately, it gets you nowhere.

That the EU is a permanent fixture is, of course, a myth – one assiduously cultivated by the "colleagues". Nonetheless, it accords with general perception. And, the human condition is such that we tend to concern ourselves with things that we can (or believe we can) change, and set to one side those that we cannot. The EU falls into the latter category.

In Euroscepticism, therefore, we have turned ourselves into an institution of professional complainers, with as much political relevance as a campaign against rainy bank holidays.

Thus, if negativity is our weakness, that would suggest that the antidote is the opposite – a heavy dose of positivism. Struggling with this idea, one comes to the conclusion that there may be something in this, not least because it strikes at the very reason behind Britain's entry to the then EEC and its continued membership of the EU.

The point here is that the real reason for our joining was entirely negative. The push towards entry came in the wake of Suez and in the post-empire days where, to quote Dean Acheson, Britain had lost an Empire, but had not yet found a role. It was a collective loss of nerve and direction amongst the élites which drove them into the arms of "Europe", a safe haven for a political class that had lost its way.

In that sense, joining the EEC was a symptom of a broader malaise, and one which continues to this day. But the safety offered by this haven has proved illusory. It has not solved any of the underlying problems – rather it has emasculated the political process as more and more powers, once eagerly embraced by our leaders, are delegated to Brussels.

It occurs that the effects of this are more profound than generally realised. They can be seen by going back to the Second World War, when one saw this nation of ours addressing issues of global breadth. Our then leader, Winston Churchill, had little time for the petty minutia which so often preoccupies contemporary government, leaving much to Atlee and Bevan, who dealt with the home front.

Compare and contrast now with the present, where so many of the issues which would have been dealt with by our leaders on a level of high policy are now in the hands of Brussels. Those leaders, therefore, have no independent dealings with these matters, and thus internalise. They look inwards, at domestic policy, those domains over which they still exercise control – the so-called "schools 'n' hospitals" agenda.

Then as central government encroaches more and more on the traditional powers of local government, we see the same thing happening at local level. There, politicians and officials, shorn of any policy-making responsibilities for the big issues, micro-manage what is left to them – hence the dustbin monitors and the other absurdities that have been recorded.

In effect, with the creation of a new, upper tier of government in Brussels, the other tiers have moved down a notch. Our central government, progressively abandoning action on the international stage, takes more interest in local issues. The local governments, emasculated by central government intrusion, become more and more obsessed with tiny details.

Taking this as a framework, the target for Eurosceptics becomes not the withdrawal from the EU. Instead, it becomes the restoration of our central government, as a central government. The necessary consequence of that is withdrawal, but that is not the primary aim – merely a beneficial side-effect.

To achieve that happy outcome, though, we have to answer the question that the élites have been evading ever since they decided to take refuge in the arms of "Europe": what is Britain's role in the world?

On reflection, I have come to the view that it is the failure to address this question which has given rise to many of the ills in our society. As have our politicians internalised, so has the population. Lacking, if you like, a higher calling – the sense that there is something more to our nation than the pursuit of comfort, prosperity and a plasma television in the corner – we too have become self-obsessed, inwards-looking … and selfish.

In effect, therefore, we are looking for the "vision thing" – a sense of purpose as a nation, a uniting ethos which will restore our sense of pride and reinforce our national identity which the EU has been so assiduously undermining.

Simply being "part of Europe" and focusing our ambitions through the institutions of the EU is not enough, and can never be a motivating force. We need to go back out there as a proud, independent nation and face the world on our own terms. And, in order to do that, we need to shed the cloying, claustrophobic protective shell of "Europe".

As to what that "vision thing" is or might be, I will explore that in Part III.