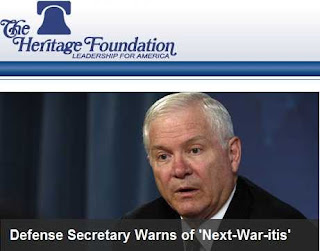 US Defence Secretary Robert Gates has given a massively important speech under the aegis of the Heritage Foundation – link here.

In his speech, he states that: "I have noticed too much of a tendency towards what might be called 'Next-War-itis' – the propensity of much of the defense establishment to be in favor of what might be needed in a future conflict…".

But in a world of finite knowledge and limited resources, where we have to make choices and set priorities, it makes sense to lean toward the most likely and lethal scenarios for our military. And it is hard to conceive of any country confronting the United States directly in conventional terms – ship to ship, fighter to fighter, tank to tank – for some time to come. The record of the past quarter century is clear: the Soviets in Afghanistan, the Israelis in Lebanon, the United States in Somalia, Afghanistan, and Iraq. Smaller, irregular forces – insurgents, guerrillas, terrorists – will find ways, as they always have, to frustrate and neutralize the advantages of larger, regular militaries. And even nation-states will try to exploit our perceived vulnerabilities in an asymmetric way, rather than play to our inherent strengths.

This is precisely the debate we have been pushing over on Defence of the Realm – the conflict between what we call the "future war" lobby and those who are more concerned with fighting and winning the current wars.

It is also a debate which also goes to the heart of our relations with the EU and it ambitions for increased military capabilities – yet the major players (France and Germany), not being engaged in any meaningful fashion in the current wars, are more interested in the "future war" scenarios. This is the driver behind the European Rapid Reaction Force, so that British future war advocates find in the EU their natural allies.

I have thus written an analysis of Gates's speech, which can be found on Defence of the Realm.