One crisis to another 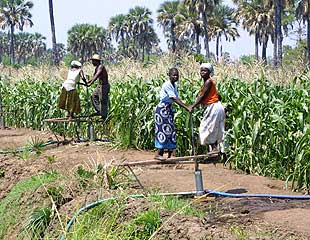 From EU Observer via Business Week comes a tale which should warm the cockles of our free-market hearts.

The source of our supposed joy is the appearance before the EU parliament of American economist and former advisor to the UN, Jeffrey Sachs: in no uncertain terms, he told his audience that, to address the food crisis abroad, there should be less food aid and more through farming assistance.

The EU, he says, should provide structural aid to increase yields from peasant farmers in poor countries if it wants to help the global food crisis rather than just throwing emergency food aid at the problem. "Rather than just shipping expensive food aid, we should be helping the poorest of the poor to grow more food," he told MEPs.

Ramming home his point, he then cited "the biggest success story of this sort" which was the "doubling of food production" in Malawi in last three years. "This can be replicated in many places, and I urge the EU to follow this kind of logic," he declared.

All this looks terribly good and the are plenty of website that attest to the "success" of efforts to increase maize growing in Malawi, not least from our own government (and here).

However, amidst welter of self-congratulatory websites, there is but one (link no longer available) from a US aid worker, who suggests that the scheme – based on subsidising small farmers to grow more maize, is not a terribly good idea.

One problem for the aid industry is that the primary cause of local hunger is rarely shortage of food per sec but a decline in purchasing power. The food is there, but the very poorest people cannot afford to buy it.

However, getting these people – the very small farmers – to grow more maize is a distinctly double-edge sword. Even with significant yield increases, the vast majority of smallholders, with a hectare or half hectare of land or less, never "get ahead" devoting most of their land to maize in an effort to be self-sufficient. In good years, they may have a few extra bags of maize to sell, but producer prices are typically depressed in surplus years.

This dynamic is borne out by a local press report in 2003, which recorded "the increase in production combined with large maize carryover stocks by government", bringing the country into food surplus. As a result says this Malawian paper, "The price of maize has dropped significantly …".

In fact, the price collapsed, a factor which some believe was a significant factor in the subsequent "famine" in 2005 - and something any competent agricultural economist should have been able to predict. Even then, there were plenty of stocks – simply, as our US aid worker found, the very poor could not afford to to buy the food. Much the same is happening now.

His recipe for success is entirely different. Instead of chasing after the "food security" which has become the catchword for aid agencies, by growing cheap commodity maize, the farmers should shift into higher-value crops such as chilies, paprika and groundnuts.

There is persuasive anecdotal evidence that those farmers who have done this have been less affected by food crises. With the higher value from their produce, they could afford to buy the food they needed. Thus, diversification in higher value crops, rather than increased maize production, is the way off the poverty treadmill.

Aid programmes which are following the Sachs route are, therefore, creating more problems than they solve. But organisations like the EU, which are just beginning to accept that throwing food aid at a crisis simply perpetuates dependency, are now beginning to look at precisely what Sachs is suggesting.

The EU enthusiasm, in particular, is driven by the fact that these schemes, being based on subsidy systems - are something they understand. Furthermore, if they can be installed in developing countries, they legitimise their perpetuation within the EU.

This was the thinking behind Barnier’s outburst and the same arguments recently appeared in le Monde.

Another important point that emerges from our own studies is that, what might work for one country like Malawi, will not necessarily be successful in any other. Each country has its own unique combination of problems, which need addressing on a case-by-case basis, solving the pinch-points which keep people in poverty.

The dreadful certainty, though, is that the EU cannot deal with the subtleties and variabilities of different markets, and can only work with a universal, "one size fits all" model. That is what it has been doing with its aid programmes for decades. Thus, the fact that the EU is perhaps poised to discard its current model in favour of another universal model, is not a cause for rejoicing.

It will simply be shifting the causes of the food crises that follow, the only thing being certain is that the crises will continue unabated.