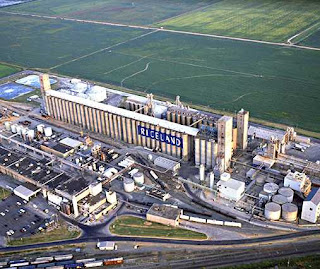 The "global food crisis" has afforded no end of opportunities for just about anyone with an axe to grind (not least this blog) to air their reasons as to why the world is running out of food. Variously, population pressure, increased consumption of meat, global warming, poverty and insecurity have all been blamed, and there are many more reasons for local shortages.

However, a fascinating article in The Sunday Times (business section) today points to the real cause – which is none of the above – and also underlines a salient but uncomfortable fact – "global food crisis" there may be, but there is actually no global food shortage.

The story in The Sunday Times is about rice – a commodity which we are told is in short supply. But what we learn here is that American rice, exported to Japan in great quantities but hitherto unused, might now be released onto the world market, driving down prices from their record levels and immediately relieving the pressure on supplies.

Behind this is a tale which verges on the surreal, going back to the early eighties (and perhaps before) when the United States was getting extremely concerned at its balance of trade deficit with Japan. By the late eighties, this had become politically highly contentious and had focused around reciprocal deals on the sale of US rice to Japan, as a way of compensating for the inflow of manufactured Japanese goods.

To cut a very long story short, in 1995, Japan eventually caved in to huge pressure and, under the aegis of the WTO "Uruguay Round", agreed to accept from the US some 770,000 tons of rice a year, by-passing its protective tariffs set at 490 percent, which had kept the Japanese market closed to imports.

However, there was a slight problem. Japan was is self-sufficient in rice and there was no domestic market for US imports which, in any case were a different variety and regarded as inferior by Japanese consumers. Despite continued efforts of US growers to make their product more acceptable, only small quantities of the imported rice was used – and then only for manufacturing – or allowed to rot. The one thing Japan was not allowed to do was re-export the product.

As a result, Japan has built up a huge surplus of unused American rice, currently estimated at 1.5 million tons, at a time when China, Vietnam India and other rice producers are banning exports, to safeguard their stocks, while countries like the Philippines are having difficulties sourcing supplies.

Now, though, the Japanese are close to finalising a deal with the US which will allow them to sell the rice on the world market. According to The Sunday Times, citing "rice experts", this move could defuse temporarily one of the principal catalysts of the food-price crisis - the perception that the world is running out of rice - and the panic and hoarding that has accompanied it. In anticipation of the deal, the global price is plunging – some analysts are suggested that rice prices could halve by the end of the month.

Although some of the longer term factors that propelled rice prices to their recent highs remain in place and the cyclone in Burma has effectively turned that country from an exporter to an importer of rice, this will buy time for the increased rice plantings to work their way through the system, giving a period of stability to the market.

The point that emerges from this is the cause of what turns out to be a "perceived" shortage is in fact an artificially induced phenomenon, arising entirely out of subsidy and trade distortions, overlaid with a heavy dose of politics.

And from that, the lessons are clear. If market mechanisms are allowed to work, agriculture is well able to feed the current world population, and accommodate population growth for the foreseeable future. The only thing standing in the way of that are the politicians. We do not have a food crisis – we have a political crisis.

Pic from US Agricultural Research Service – showing US rice silos.