A retreat into infantilism 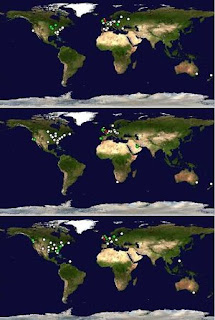 It is not too untoward to suggest that the main front-page headline of a newspaper is a statement. In effect, the editorial staff are telling us that their choice represents what they believe to be the single most important issue of the day.

I can write this without any great concern about alienating our British readers. For a little while now, we have been monitoring the location of our "hits" and the sampling indicates that at least 80 percent - probably more - come from overseas (mostly, but not exclusively the United States - see pics). Barring a small but loyal following, our UK hits are minuscule.

That, it seems to me, points to an underlying malaise in British politics and the nation as a whole – although it is always dangerous to generalise. Shorn of any real power, lacking any real purpose and confronted with a dangerous, difficult world – in which our government in Brussels looms every larger – it is as if we have either retreated into ourselves or taken refuge in the domestic tittle-tattle of soap opera politics, rather than face reality.

Interestingly enough, in the same edition of The Times that so enthusiastically embraces the travails of Cherie Blair, Rees Mogg writes of the potential effects of a $200 barrel of oil, which some analysts believe is on its way.

Mogg is so often wrong on so many things that it has become something of a joke, certainly on this blog, that – as a general vade mecum - one can take what he says and expect the opposite.

That said, his general point that politics, in the final analysis, is about economics, stands up well to scrutiny, as does his general thesis in his piece, that the prices of energy and food are vitally important. These he asserts (rightly) will have a deciding effect on our prosperity in the near and mid-term future and, therefore, our voting intentions. "If oil does go to $200 a barrel," writes the great sage, "it will not matter who is leading the Labour Party - the Labour Government will be kaput."

The price of food, to give it its due, is the focus of the front page of The Daily Mail which records that: "Millions of families are having to spend almost £1,000 a year extra on food after more punishing price rises."

The annual increase in the price of a basket of essentials, it tells us, surged to 19.1 percent in May, according to the Daily Mail Cost of Living Index. The rate has jumped alarmingly from 15.5 per cent in April – a 3.6 percent rise – and there is no sign of the pressure easing.

At this point, I cannot resist the temptation of reminding readers that this is precisely what we were writing about in February (and many times since, for instance, here), so that while the "real" political blogs were trilling about the latest episodes of the political soap opera, this blog was engaged in the bloody trench warfare that will, in time, come to dominate the political agenda.

Interestingly, The Mail's news puts our overnight post in perspective. Clearly, the Treasury is aware of the significant and potentially dangerous effect of food price inflation, hence Darling's initiative in writing to his EU colleagues. That the Mail does note, recording that:

Chancellor Alistair Darling has called on his EU counterparts to take radical steps on food prices. He wants "fundamental reform" of the controversial Common Agricultural Policy.

But what goes unremarked by the paper – even though it points up that singular truth that everyone seems to want to avoid – is that, at a time when we need most urgently to address such crucial issues as food prices, the UK does not have a food (aka agricultural) policy. This is the sole competence of Brussels so, even though he recognises the growing problem, our Chancellor is entirely in that hands of our central government.

That, in our view, should have been the major issue, not least because, when it comes to any such reforms, the drivers will be the Franco-German axis. And, as we know, they are singing from a different hymnsheet.

This is where we enter really dangerous territory. It is all very well the Conservative groupies trilling about the shape of a future Cameron premiership but, as Darling is well aware, the levers of power needed to address real issues are no longer in the hands of British politicians.

Come what we have come to call the "electorally mandated reshuffle" (aka general election), Mr Cameron will find himself in office but not in power – leaving this British nation the option of further retreating into infantilism or, finally, confronting the reality and doing something about it. Sadly, on current form, it will be the former - although the rumble of empty bellies can do wonders in focusing minds.