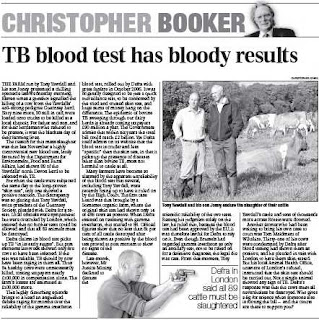 In the days when national newspapers had agricultural correspondents and still took a vague interest in events outside the Westminster bubble, the main story retailed by Booker in his column today would doubtless have filled a few column inches in the papers earlier in the week.

As it is, it is left to Booker to record another example of the catastrophic handling of the slow-motion epidemic of Bovine TB which is rampaging through our cattle herds and is set, inexorably, to cost the hard-pressed taxpayer over £2 billion, without even dealing with the problem.

The story itself is well documented in the column (accessible from the link above) so there is no need for me to reinvent the wheel, and further details (and much more background) can be found on one of our sister sites, Bovine TB which has been labouring in the wilderness over what is, in fact, one (but only one) of the most egregious failures of our current government.

What gives the story its piquancy is that the incident recorded by Booker arises from a misreading of EU law by a British judge, who allowed something to happen which he could have prevented. Once again, we see the dire mix of British and EU law, leaving judges floundering in a miasma of incomprehension, allowing our own provincial government to perpetrate its own brand of madness, in an affront to common sense and decency.

Interestingly, the one other blog which seems to have linked to Booker is Tim Worstall who asks, "How did this happen?" and then, "Why are we ruled by morons?".

The first question is relatively easy to answer. It is quite simply because neither our media, nor our politicians - nor indeed the bulk of the population - care enough to stop it.

This did not have to be. In his brief tenure as shadow agriculture spokesman, Owen Paterson lifted the profile of this issue – then with minimal help and exposure from the MSM. Since he was despatched to the obscurity of the Northern Ireland portfolio – where much of his good work has to go unreported – the issue has died politically. Then the media – never really interested – has been happy to let sleeping dogs (or badgers, in this case) lie.

As to Tim's question, "Why are we ruled by morons?", the simple answer is that we are not. DEFRA has an agenda. The Labour government – in hoc to animal rights organisations – also has an agenda. Fulfilling both is costing us £2 billion plus and ripping the heart out of the dairy industry. And frankly, no one cares – or not enough to make the difference. Who, Tim, are the real morons?