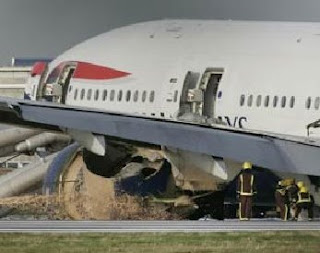 … others follow. We did it a week ago and now The Daily Telegraph has it on its front page – the BA 777 crash, which it attributes to a "fuel freeze".

Being The Daily Telegraph, although it mentions that the weather was "unusually cold", it rushes in to add that this "was not unprecedented" – even though some pilots in the region reported that they had never experienced such cold conditions. Thus, the paper misses out on the "global cooling" inference.

Neither does it mention the fuel pump software concerns, or the possibility of a temperature gauge malfunction, omitting to tell us that, while the BA flight opted for a higher altitude, other aircraft were taking refuge at lower flight levels because of fuel temperature problems.

Not only do we do it first, it seems, we do it better. The only consolation is that The Times is even worse, while a story in the London Evening Standard is so similar to that of the Telegraph that one suspects the journos have been doing the usual "cut and paste" job from a press release, rather than doing their own homework.