The parasites in our midst 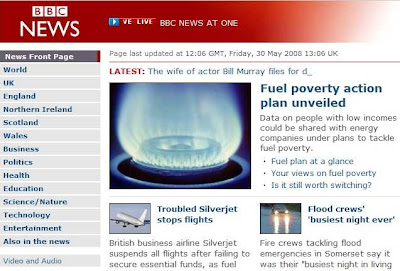 Occasionally we touch on the difference between the US and British political blogospheres. In particular, we have noted that the blogging phenomenon in the US is much more vibrant and well-developed, to the extent that, across the pond, blogs have become a political force in their own right.

One reason for the difference may be that the media is far less monolithic in the US – there is, for instance, no "national" newspaper in the US, so there is a great deal more diversity, leaving spaces in which the bloggers can operate.

What applies to the newspapers also holds for the broadcast media, with the added difference that, in the States, there has emerged the highly partisan "talk radio" network, each station carrying individualistic agendas and interacting with the blogosphere.

This, for a variety of reasons, does not happen in the UK, not least because the broadcast media is dominated by the BBC, fed by a bloated diet of taxpayers' funds, accountable to no one in any recognisable sense.

And, rather than interact with the blogosphere, the predatory BBC - seeks to dominate the net, pushing its own "liberal" agenda through its vast network of taxpayer-funded websites, which it then shamelessly promotes via its radio and television programmes.

Not only that, the whole operation enjoys resources that no other organisation could begin to match. The extent of that spending is brought home by a report today that tells us that, not only did the operation have a budget of £74.2 million, it massively overspent, chewing up £110 million on its online "services" last year.

The Daily Telegraph reports that "cash-strapped regional newspaper owners" are particularly concerned that the BBC could take online readers away from their sites, but its own website presence – on which its business model relies – must also be affected.

However, the Telegraph and the other national newspapers are also part of the problem, pushing their "clogs" (corporate blogs) for all they are worth, leaving little space for the free-lancer, operating with limited or no funds. And, unlike the free-lancers, who tend to be generous with their links and "blogrolls", the anally retentive clogs are more grudging about acknowledging sources outside the guilded circle.

Thus, we see these "giants" dominate the web, setting the agenda and thereby soaking up, controlling and thereby neutralising political discourse. The independent British political blogosphere is left to pick up the crumbs from the rich man's table, lacking the force of the more vibrant US scene – less able than it should be to break up the cosy political consensus.

And, the worst of it is, as far as the BBC is concerned, we pay for our own emasculation.