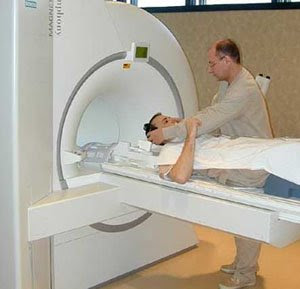 Its grandly named Medical Editor, Rebecca Smith, then tells us that, "An investigation into the safety of MRI scanners is to be carried out amid health fears over the effects of the scans…". But only in the penultimate paragraph do we read that the Health Protection Agency (HPA), which commissioned the study, intends only to look at "NHS staff and others who work with the machinery regularly." It will not involve patients.

A spokesman for the HPA is then cited, saying: "This is new technology – it has only come to the fore in the last decade or so. This is a suitable precaution to do a study of workers to see if there is an effect. Patients should not be concerned."

In fact, as we know, this "suitable precaution" is no such thing. The study is a face-saver of the EU, after its abortive attempt to implement the Physical Agents (Electromagnetic Fields) Directive, which was due to come into force last April.

It had been quietly shelved in February after protests from scientists of international repute, attesting that there were no dangers involved in the usage of the machines. In Britain alone, it was estimated that the directive could make illegal some 30 percent of scans, needlessly endangering the health of thousands of British patients, many of them children.

Thus does the elephant live, this time costing an unknown sum and hundreds of hours of fruitless work, simply because the EU commission failed to do its homework before introducing totally unnecessary legislation and now needs to save face.

Also feeding the elephant is the BBC, which blandly tells us that, "Experts are to investigate whether magnetic resonance imaging (MRI) scanners can damage health."

Needless to say, there is no hint as to why these "experts" have suddenly taken it into their heads to carry out this undoubtedly expensive study. The BBC simply tells us: "…there is concern exposure to the magnetic fields they create may produce adverse long term health effects."

Unlike The Telegraph, however, the EU does get a mention. "The European Parliament," the BBC says, "was due to vote on new rules to limit exposure to powerful electromagnetic fields earlier this year. But following advice (our emphasis) from doctors, who said the proposed limits were so low they could prevent the use of MRI scanners, the issue was placed on the back burner."

This, of course, is a travesty of a report. The legislation has already been passed, but the implementation was postponed by the commission in October last, a decision rubber-stamped by the EU parliament in February.

As to the advice from "doctors", this was a storm of protest which stopped the commission in its tracks when it realised that its action could kill hundreds, if not thousands of people.

Such is the nature of this elephant in the room, however, that not only is it invisible, it appears to be teflon-coated, allowing even its more egregious cock-ups to go unreported.