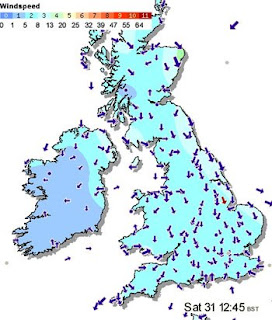 This morning, and currently (at the time of writing) the whole of the UK was effectively in the state of no wind generation - see real-time weather map. Our Atlantic gale-ridden West Wales coast was showing 2 and 3 mph for over three hours.

There are a few 9 and 10 mph readings in E. Anglia and 12 mph at Campbeltown. Stornoway on Lewis was reading 6 mph.

So much for the plague of wind factories disfiguring our landscape, now standing idle. It is unlikely that the system is producing enough power to pay-back transmission loss. We are in a situation where, probably, the yaw motors are absorbing more electricity than is produced.

Meanwhile, we get a report that more than 31,000 scientists have signed a petition denying that man is responsible for global warming. The academics, including 9,000 with PhDs, claim that greenhouse gases such as carbon dioxide and methane are actually beneficial for the environment.

The petition was created in 1998 by an American physicist, the late Frederick Seitz, in response to the Kyoto Protocol a year earlier. It urged the US government to reject the treaty and said: "The proposed limits on greenhouse gases would harm the environment, hinder the advance of science and technology, and damage the health and welfare of mankind."

It added: "There is no convincing scientific evidence that human release of ... greenhouse gases is causing or will, in the forseeable future, cause catastrophic heating of the Earth’s atmosphere and disruption of the Earth’s climate. Moreover, there is substantial scientific evidence that increases in atmospheric carbon dioxide produce many beneficial effects upon the natural plant and animal environments."

The petition was reissued last year by the Oregon Institute of Science and Medicine, an independent research group, partly in response to Al Gore’s film on climate change, An Inconvenient Truth.

There is a similar lack of consensus on the utility of wind factories, and much evidence that the "dash for wind" is utter madness. Yet, while the signs of an impending energy crisis are upon us, the cretins Greenies remain united in their madness.