The silence of the "colleagues" 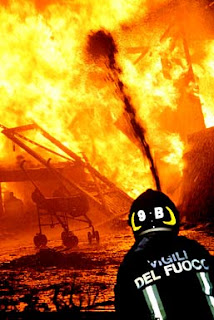 An extraordinary situation is developing in Italy, reported by The Times and others. Writes this paper: "Gypsy shanty towns burn in Naples as Italian police swoop on illegal immigrants," with pictures of firemen hosing down a camp of Roma people that was set on fire on the outskirts of Naples.

This is all part of a nationwide police round-up of nearly 400 illegal immigrants from the Balkans and North Africa, while arsonists have been attacking Roma gypsy, making it clear they are unwelcome.

According to The Times, this week's assaults on Roma shanty towns by scores of youths on scooters and motorbikes wielding iron bars and throwing Molotov cocktails were sparked off by the capture of a 17-year-old Roma girl who last weekend entered a flat in Ponticelli and tried to steal a 6-year-old girl. Chased by the mother and neighbours, she had to be rescued by police from being lynched.

The city erupted in fury, with local women leading the marches on the Roma camps to the chant of "Fuori, fuori [Out, out]". Night after night young men — allegedly acting on the orders of powerful local clans of the Camorra, the Naples Mafia — have set the sites ablaze, blocking attempts by the fire brigade to put out the fires, with exploding gas canisters completing the destruction. The women jeered at the firemen, shouting, "You put these fires out, we start them again".

The police move comes as part of the first step in a drive on crime promised Berlusconi's new government. Some 118 people are being held in the operation have been ordered to be expelled immediately for offences ranging from drug dealing and robbery to prostitution.

Plumes of smoke, we are told, were still rising yesterday from the smouldering, blackened ruins of a Roma gypsy camp attacked and burnt to the ground by local vigilantes in Ponticelli, a rundown industrial suburb in the east of Naples in the shadow of Mount Vesuvius. There were similar scenes of devastation at camps nearby.

Hundreds of Roma families have fled for their lives with their belongings piled on to small pick-up trucks or handcarts. Some have been taken under police protection to a former school used to house illegal immigrants in a northern Naples suburb. Others have found refuge at Roma camps elsewhere in the Campania region, while a few have been taken in by Naples residents shocked at this outbreak of "xenophobia".

It appears that the Naples arson attacks are the result of long-festering anger throughout Italy over rising crime levels and urban degradation, much of it blamed on Roma gypsies and the estimated half a million Romanians who have emigrated to Italy since Romania joined the European Union.

According to the Roma rights group, Opera Nomadi, there are 2,500 Roma in Naples, 1,000 from Romania and 1,500 from the Balkans. A spokesperson for the United Nations High Commission for Refugees (UNHCR) drew parallels with Roma people forced to flee from the Balkans, saying: "We never thought we’d see such images in Italy."

And today the Berlusconi Cabinet is approving an emergency "security package" drawn up by Robert Maroni, the new Interior Minister and deputy leader of the anti immigrant Northern League.

This includes the dismantling of Roma camps, the appointment of "special commissioners" to deal with "the Roma problem" in Rome and Milan, the tightening of border controls and the speeded-up deportation of immigrants who cannot show they have a job or an "adequate" income. Maroni also wants to make illegal immigration a criminal offence.

As far as EU law goes, some of this surely must be on the margin of legality. The Roma are, after all, EU citizens. But, so far – unlike last time there were mass expulsions - we have had no reaction from the commission. Are we getting to the point where we have second-class EU citizens?