The Greenies are worried 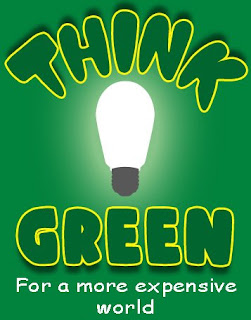 Andrew Grice, political correspondent for The Independent is weeping into his cups this week about the demise of "green issues" in mainstream British politics – although not without displaying the arrogance of his breed.

Grice notes that Gordon Brown, Ken Livingstone and 300 Labour councillors were not the only casualties of the local and London elections. No one seems to have noticed, but the other big losers, he writes, "were those people who care about the environment."

As an aside, it is typical of these bleeding heart greenies to assert that they are the only ones who "care about the environment" – the same mindset which has it that those who speak up about food scares are "killing children". A pox on them all.

Anyhow, the weeping Grice tells us that we "might just look back on May Day 2008 as the moment when the power of green politics peaked and went into reverse." He hopes he's wrong – we, of course, hope he is right. He doubts he is wrong. On this, and only this, we agree.

Grice thinks the reaction of the two main parties to the elections was "instructive". Desperate to prop up his own position after Labour's rout, he writes, Mr Brown needed to toss a few bones to the voters and jittery Labour backbenchers:

So it suddenly emerged that he was about to dump the so-called "bin tax" - allowing councils to charge householders who do not recycle their rubbish. Downing Street didn't confirm it, and five token pilot schemes will go ahead, but it's clear the bin tax has been binned.

Brown allies also floated the idea that the 2p rise in fuel duty might be shelved again. No doubt this was an attempt to placate motorists. As well as being anti-green, it was a surprise, since the Chancellor, Alistair Darling, will need all the revenue he can get when he delivers his pre-Budget report in the autumn - not least to compensate the losers from the abolition of the 10p tax rate.

But it is not only Brown in the sin bin – taxed or not. Greenie David Cameron shares the ordure, having held "a prime ministerial press conference" in which he set out his priorities for government. Significantly, the words "environment" and "climate change" did not appear in his 1,200-word statement.

Was this, Grice asks, the same man who fought the local elections on the campaign slogan "vote blue, go green"? And was the leader who hugged huskies to convince us his party had changed addressing new issues and no longer preaching to the Tory converted? Green issues have gone out of fashion for Mr Cameron; they have served their purpose.

So the wailing goes on, with Grice commenting sourly that two main parties will continue to pay lip service to green issues in the run-up to the general election. "But something has changed in the past week," he complains. "Both parties will put saving seats before saving the planet."

And the answer, according to Grice is: "If they carry on like this, voters who still put the environment at the top of their list will have to vote Liberal Democrat or Green if they want to change the climate of British politics."

Despite his greenie fervour, Grice may find promoting the love of his life an uphill struggle. Reuters is recording that the recent Nature paper has sparked worries that "briefly cooler temperatures" may take the heat out of the warmists' sails (if I can mix metaphors).

"Let's say there wasn't much of a warming for the next 10 years, how will the public and politicians play this out?" said Bob Watson, former IPCC head and current chief scientific adviser to Britain's environment ministry. He adds that it is "important to explain that fluctuations were an expected part of a general, manmade warming trend."

From the media in general, he is certainly getting some help American Thinker report that sections of the US media downplayed flood warnings arising from meltwater from the "near-record snows" of this winter, because reminders of the big chill did not fit into the MSM's chosen story line that mankind is giving Mother Nature a fever.

On the other hand, with but a few days of sunshine and we have had a rash of stories in the media about "hottest days on record" and predictions of a hot summer. This conveniently supports the global warming narrative, in marked contrast to the absence of reports about the cold winter.

What Grice is pointing up, however, is a serious problem for the Conservatives. Increasingly, global warming is seen by the general public as simply an opportunity to levy more taxes and people are becoming increasingly aware of the costs.

Thus, despite having nailed his flag to the greenie mast, Cameron is going to have to find a way of rolling back the global warming agenda. Then the fun will start as he will find himself confronting the EU's environmental requirements – the poisoned chalice which he really cannot avoid.