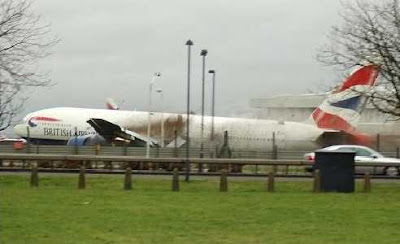 Here is something for disaster vulture al Gore to ponder.

Quick to point to global warming as the cause of any passing catastrophe, he might care to devote a few minutes of his precious time to reading an analysis of the crash of the British Airways B777 on 17 January 2008.

The title tells all, pointing to: "Sustained Exposure to Extreme Cold Weather", as a major contributory factor. Apparently, the cold may have caused the fuel to clog in the lines, robbing the engines of vital power as the aircraft came into land.

Readers will recall how the aircraft, on its approach to Heathrow after a trans-polar flight from Beijing, suffered an inexplicable loss of power. As a result, the aircraft only just cleared the perimeter road and a boundary fence, slamming down well short of the runway proper.

Mercifully, there were no fatalities, but it was a very close call. Touchdown was a mere 50 feet inside the airport perimeter fence. Another 600 feet shorter, and the crash would have occurred on a major road (the A30), recalling the fatal accident in 1989 at Kegworth, UK, when a British Midland B737 crashed short of the airport against a steep highway embankment, killing 47 of the 126 passengers and crew aboard.

From the investigation of the British Airways B777 crash, it has emerged that weather had been extremely cold that day en route from China to the UK. It had been so cold that some pilots had reported they had been forced to descend to lower altitude to keep their fuel from freezing. Amongst them was a South African Airways pilot who had to descend to 25,000 feet for the last hour of the cruise before his aircraft's fuel temperature had began to warm up.

Never in 25 years of jet flying had he been forced to do this and, he reported, every other jet in his vicinity that day had also descended for the same reasons. There had been an unusually cold air mass over southern Russia and Germany that day. Another pilot commented that the air temperature over the UK at the time [of the accident] was "some of the coldest I've ever experienced with OAT [outside air temperature] at higher levels down to -70 degrees Celsius".

Crucially, the BA 777 was on a more northerly flight plan out of Shanghai and would have been in the cold air mass longer than most aircraft. Undoubtedly, the pilots would have had to descend with low fuel temperatures as well, but there is an unconfirmed report that they did not.* (Adds)

There is also an issue here with the automatic engine controls, with a suggestion that the computer-controlled fuel metering systems may have become "confused or unresponsive" by the unprecedented cold.

But there was also another factor. Heathrow airport had adopted a new air traffic control procedure known as the Continuous Descent Approach (CDA). This is more fuel efficient than the traditional "step-down approach" and involves the aircraft descending from cruising altitude with the engines idling.

However, to prevent blocking of the filter due to formation of wax or ice in the fuel, a heat exchanger warms the fuel upstream of the filter. Such heat exchangers use hot air bleed from the engine compressor or heat from engine or hydraulic oil. In a classic application of "sod's law", the times when the greatest heating is required are often those times when the engine is not operating at maximum, for example, during a lengthy descent at idle from high altitude.

Thus the suggestion is that, with ultra-cold en route temperatures inducing clumps of paraffin or ice, and a cool engine during descent at flight idle, "perhaps the stage was set". Any blockages occurring at different times during the descent, and the simultaneity of the thrust loss, would have been seen only when (and because) the auto-throttle called for a thrust increment on the final approach.

This is a typical aircraft accident scenario, where a combination of factors give rise to an incident – the so-called "event cascade". But it would appear that the major contributory factor could have been the extreme cold. In other words, global cooling can kill.

Put that in your pipe and smoke it, Al!

*In another report, it states that, as part of its flight plan the British Airways aircraft was required to climb initially to 34,100 feet and then – owing to extreme cold – descend to 31,500 on the Chinese-Mongolian border.

But to accommodate a request from air traffic control the aircraft’s crew accepted a climb to a higher altitude, 34,800. The Aircraft Accident Investigation Board (AAIB) says the ambient temperature at that height was minus 65°C, but adds that “the crew closely monitored the fuel temperature”.

After the aircraft crossed the Ural mountain range in Russia it climbed further to 38,000 where the ambient temperature dropped to as low as minus 76°C.

There is some question as to whether the temperature gauge might have been misreading. Otherwise, it is certainly anomalous that the BA aircraft could have flown at 38,000 feet while other aircraft, experiencing the same conditions, were descending to 25,000 feet.