It's what isn't said that matters 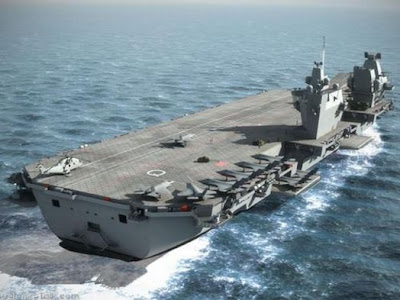 The much expected and somewhat overdue announcement on the go-ahead for the Navy's two "super" carriers was made today.

According to The Times the £3.9 billion contract will not be signed until June, the delay being to allow the formal establishment of a joint venture company which will build the 65,000 ton ships.

This is the Aircraft Carrier Alliance, which include BAE Systems, VT Group, Thales UK, and Babcock International, which runs Rosyth dockyard. We are told that the carriers are to be constructed in sections in shipyards at Portsmouth, Barrow-in-Furness, Glasgow and Rosyth, with final assembly at Rosyth.

What we are not told, however, is anything about the final design of the ships, any detail about its intended capabilities or – crucially – the types of aircraft that will be operated. It is assumed that the F-35 short take-off vertical landing version is still the preferred option, although there has been no confirmation at all on this.

Details of the design would, of course, give some clues as to whether the F-35 is to be chosen, but as long as they are not revealed, the government can keep its options open.

There thus remains a possibility that the government could be considering dumping the F-35 (formerly called the Joint Strike Fighter) and buying in the French-built Rafale.

If The Sunday Times is any guide, that could be a very serious option. Nicola Smith and Michael Smith, writing for the paper, claim, "Royal Navy may share new carriers with France", telling us that the Royal Navy and the French navy "began talks last week aimed at sharing their aircraft carriers."

With the French thinking of cancelling its new-build carrier, the two Smiths assert that Sarkozy and Brown will build on the "bilateral carrier group interoperability initiative", proposed by Nicolas Sarkozy, at his summit meeting with Brown in London in March.

The outcome of this could be an arrangement whereby either navy could borrow an aircraft carrier from the other if their own was unavailable as a result of a breakdown or refit. "If we have no carrier to do a mission then the only way currently is to try and form a coalition ... and to ask a country if it will do the mission," said Captain Jérôme Erulin, the French naval spokesman.

So far, MoD officials have dismissed the talks between the two navies as "aspirational" and insisted there were "no current plans" to share carriers with the French. But, if the aspirations have any chance of being realised, then choice of aircraft will be crucial. A carrier rigged for the F-35 would be of no value to the French, as it would not be able to operated its Rafales from it.

Thus, as always, we are being kept in the dark, the more important part of today's announcement being the things which have not been said.

Cross posted on Defence of the Realm.
Posted by Richard at 16:55